Thunder rumbled from across the lake. Even from inside my tent, I could tell that it was coming out of the western skies. A bank of clouds had just started to build there when our group of Museum members gave up star gazing and went to bed at our campsite on Sawbill Lake in the Boundary Waters Canoe Area Wilderness.

And although I couldn’t see them, I could sense the clouds in the dark of my tent as the thunder rumbled nearer an hour later. Fifteen seconds between flash and sound. Ten seconds. Seven seconds. That one was bright! And then 10, 15, 20, again as the tiny storm passed and rumbled into the distance.

From across the lake I heard a soft hiss. The rain was coming. Eyes closed and ears tuned, I could actually hear the rainstorm’s approach. The hiss grew louder and louder, then mixed with the gentle pitter-patter of raindrops on my tent fly.

The pitch of the distant sound grew deeper, and the volume louder. Bigger raindrops approached. I could imagine just how the lake would look, with giant silver drops jumping up from the surface, and tiny ripples from each drop colliding with its neighbors in a dynamic chaos. Then the rain’s roar peaked like a cymbal-crashing symphony as it pelted my tent and the trees above.

In seconds, it was over.

The soft hiss of mist continued for another minute, followed by the irregular dripping off of tree leaves. In the space of about 20 minutes, the magical rainstorm was over.

“Rain is grace; rain is the sky condescending to the earth; without rain, there would be no life,” wrote John Updike. Throughout the night – and throughout the trip – the sky condescended on us numerous times. We slogged through boot-sucking mud puddles on the portages, and sank knee-deep into a beaver meadow (in the stinky muck that many paddlers affectionately call “loon puke,”). We endured cold rivulets burrowing into the cuffs of our rain jackets with every paddle stroke, and sloshed the ballast water from the bottom of the canoes down our necks as we flipped them up for portaging.

We also spotted the tracks of at least one wolf pup as it, too, walked along the beaver meadow. Even with its four toes splayed wide for grip, the tracks still imprinted perfectly in the rain-softened soil. Dry dirt would not have recorded its passing nearly as well.

Fungi erupted in the wet woods along every portage trail, brightening up the path with a rainbow of almost indescribable colors. A dinner plate-sized Amanita with white polka-dots on a yellow-orange cap glowed from underneath some ferns. Whitish, purplish, and brownish fungi clustered around fallen logs, rotting snags, and even in the moss. One giant, orange, funnel-shaped chanterelle sprouted right from the middle of the hard packed trail.

We actually looked forward to hiking the soggy portage trails a second time, as we went back for another load of gear. The walks allowed us to point out the neat fungi and plants, and debate about the owners of various animal signs.

An inky black mass in one puddle drew everyone’s attention. Bear scat? Wolf poop? Something dead? The second trip gave us a chance to pick apart the pile with a stick. Black hair -- possibly bear – dominated the scat. Would a wolf have killed a bear cub? Or might it just have scavenged on the carcass of a cub dispatched by a jealous boar?

A huge old snapping turtle caused traffic jam on one portage as we halted our carry to go back for cameras. We puzzled over the intentions of several leeches stuck to her shell. These mysteries took our minds off of sore shoulders and wet feet. And in the meantime, the sun came out!

It is amazing how much that far off star can affect our moods. After several hours of heavy clouds and waves of showers, a little sunshine made our loads feel lighter and our moods brighter. A chance to dry out damp gear and swim away the gritty film on the backs of our necks became a cherished gift instead of mundane routine.

Rain is just as much a part of the wilderness as anything else, and I think there is great value in being exposed to the elements more often. We spend much of our lives in climate-controlled shelters, and can sometimes forget the symphony of a rainstorm on our tent, the beauty of silver raindrops jumping out of the lake, the excitement of a cloudburst from nowhere, and how quickly we dry out.

According to an old woodsman’s adage “No matter how cold and wet you are, you’re always warm and dry.” If not warm and dry, perhaps we find that we are less uncomfortable than expected…and more appreciative of the sun when it shines. 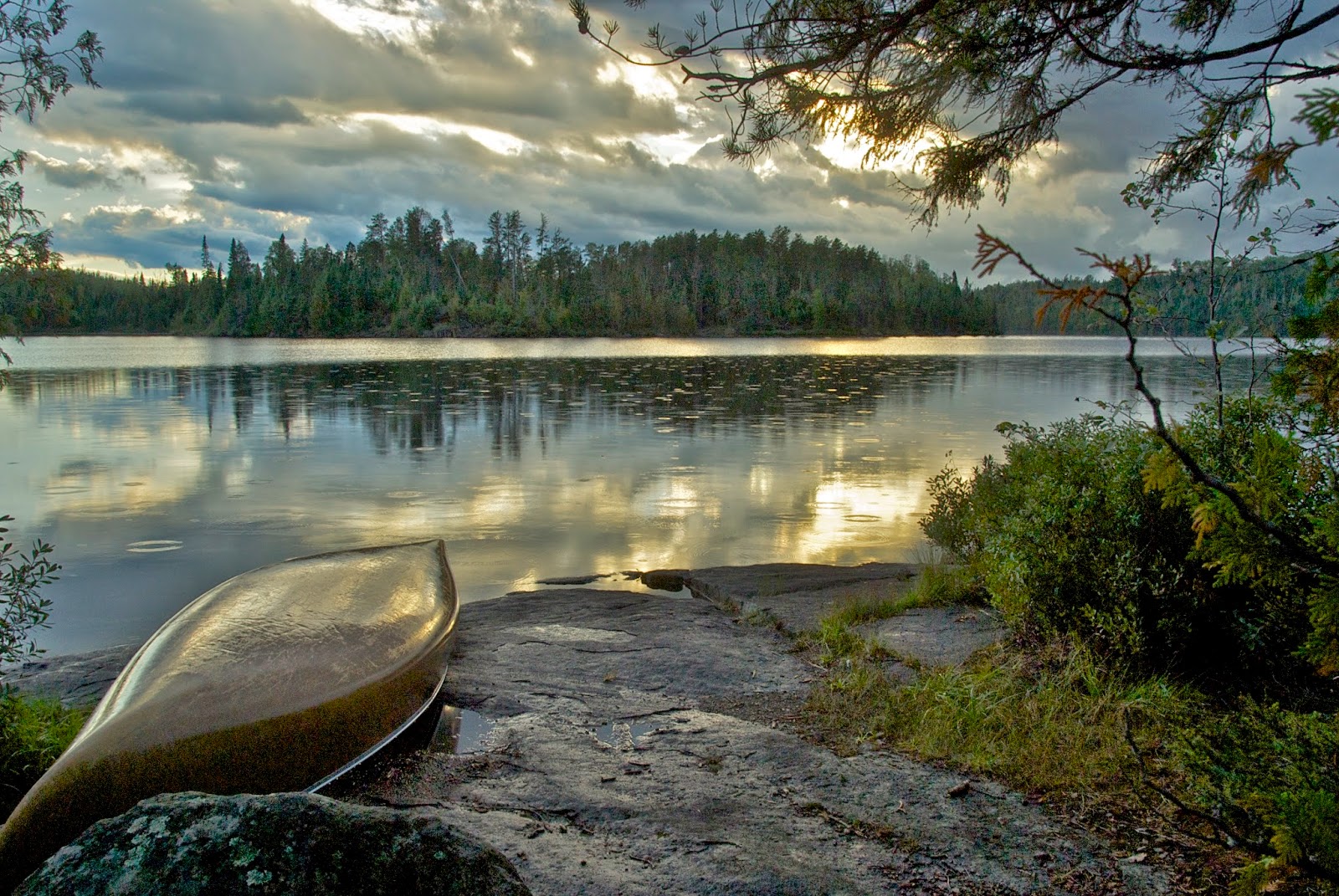 The setting sun shimmers off ripples from a passing shower. 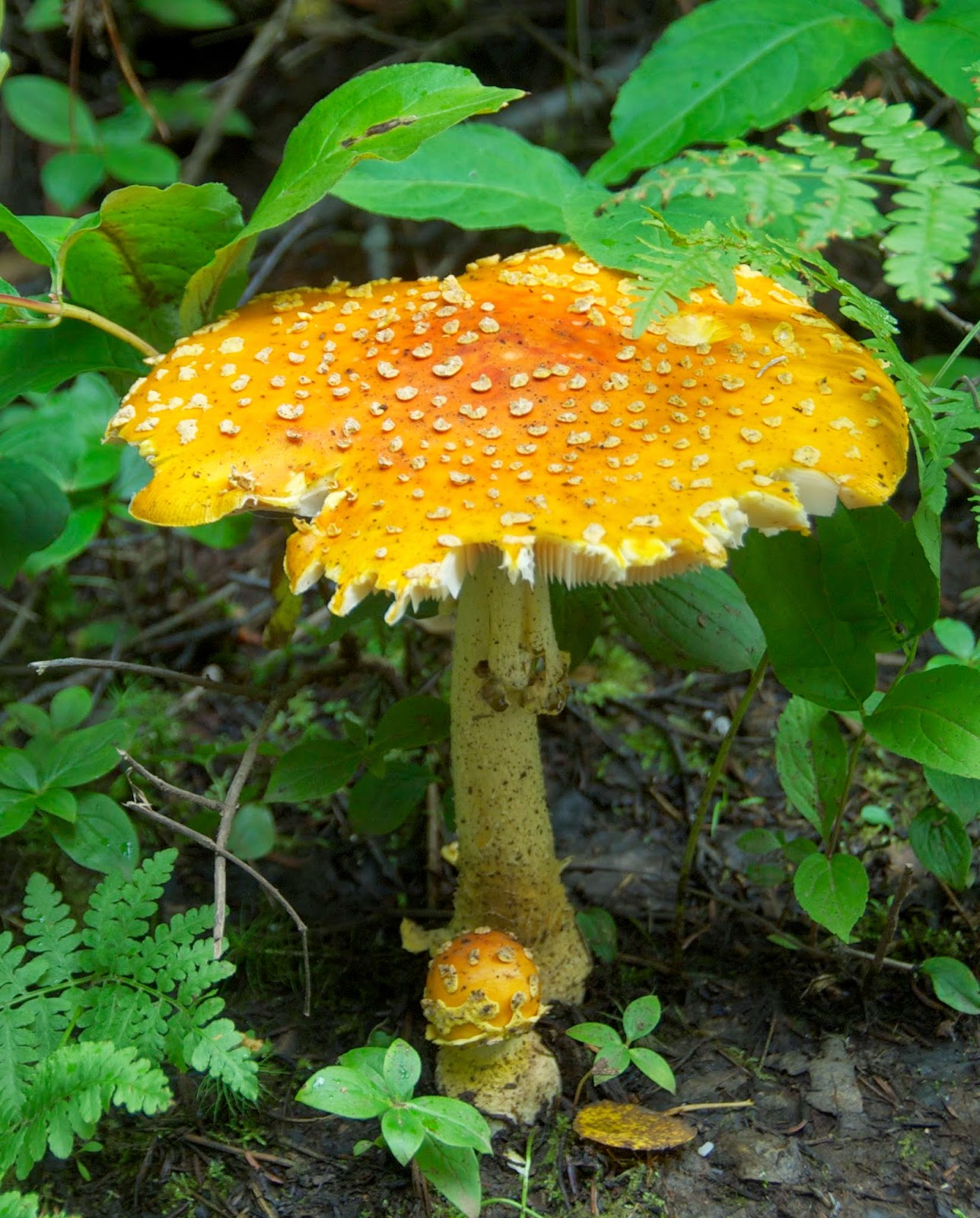 Our wet fall has encouraged an explosion of mushrooms like these Amanitas. Photo by Larry Stone.
Posted by Emily M. Stone at 8:47 PM