Tongues of the Earth


“Rain, and then the cool pursed lips of the wind draw them out of the ground… astonishing in their suddenness, their quietude…” (Mary Oliver, Mushrooms)

Astonishing indeed. The recent rains have watered the Earth like one of those old terracotta chia pets, and now mushrooms sprout from every sodden surface.

In the breathless shade of a hemlock forest, I wandered among the buzzing mosquitoes and stoic trunks, fairly tripping over fungi. The trees dripped with a thunderstorm’s leftovers, and (looking forward to snowflakes instead of bugs) I stopped to catch a drop on my tongue.

Bright orange globs of hunchbacked lobster fungus, sunshine-yellow spikes of club fungus, and the glowing white cap of a Destroying Angel illuminated dim, shadowy duff. Without a guide—human or paperback—I simply admired the diversity of colors and forms, identifying only a few of the most distinctive organisms from my tenuous memory.

In these forest soils beneath my boots, 90% of the living biomass is fungal. An interwoven mat of mushroom mycelia connects trees with resources, returns nutrients to the soil, and exchanges information. Some call it the “wood-wide web.” Mycologist Paul Stamets calls it “Nature’s Internet.” I see a fascinating parallel with my own internal microbiome that I wrote about last week: For every human cell in my body, there are about 10 resident microbes. They help me digest food, tune my immune system, and even alter my mood. None of us is ever truly alone.

Mushrooms make pretty good company, I would say, and perhaps that is because mushrooms are more closely related to animals than they are to plants. For one, plant cell walls are made of cellulose, while mushroom cell walls are made of chitin. Chitin is the stuff of crab shells and butterfly wing scales. It doesn’t exist in plants. Plants are autotrophs – they make their own food out of sunlight, water, and air. Fungi and animals are heterotrophs, who get their energy by breaking down food they find. Plants exhale oxygen; fungi and animals inhale it.

Despite the incredible community of life here, this magical place (“Fairyland” is its official name) was a source of solace and solitude for a young Mary Griggs Burke. Out of her love of these woods grew an admirable land ethic. She wrote "I am glad more people are enjoying the beauty of nature--but only if people value the land and treat it with respect can they preserve what they enjoy." And with that in mind, she founded the Cable Natural History Museum.

These woods are full of connections. I wouldn’t be here without Mary’s foresight, generosity, and love of nature. The trees would not be here without the mycorrhizal fungi that extend their root systems. Each tree has hundreds of thousands of miles of fungal threads associated with its roots. The fungus supplies the tree with nutrients and water. In exchange, the tree provides sugars synthesized with the sun.

Scientists are discovering that sharing – symbiotic relationships – among highly diverse and unrelated organisms is more important than they used to believe. “Life is a network of cross-kingdom alliances,” says theoretical biologist Lynn Margulis.

A few days later, when I brought a multi-generational family into Fairyland with me, it only seemed to multiply the magic. More eyes saw more fungi, and more people exclaimed exuberantly over mushrooms, too. While Rachel Carson  wrote that “If a child is to keep alive his inborn sense of wonder, he needs the companionship of at least one adult who can share it, rediscovering with him the joy, excitement, and mystery of the world we live in," I’ve found that adults need such a companion as much or even more.

So, we discovered things together. This time I carried the “Lone Pine Field Guide to Mushrooms of Northeast North America.” From there, we learned that the tiny, red-orange cups sprouting from a rotting log are named “Eyelash Fungus.” When we leaned in closer, the fringe of black “eyelashes” on the margins became visible. Chuckles of appreciation rippled through the group.

The next find was a patch of little clubs with fleshy, creamy white fans atop darker, somewhat velvety stalks. The name “Velvety-Stalked Fairy Fan,” seemed amusingly appropriate. I don’t feel like we need to know the names of everything in order to appreciate them, but sometimes it does add to the fun.

“Look here,” whispered the family patriarch with a wiggle of his toe. At the end of his shoe we found an elfin grove of two-inch-high black clubs. They blended in so well with the shadows and damp wood, that we were quite proud of ourselves for spying them. But the name, “Common Earth Tongue,” seemed like an insult to our keen observation skills. Nearby, a cluster of similar, but yellow, clubs sprouted cheerily in the gloom. The name, “Yellow Earth Tongue,” endeared us a bit more.

Tongues of the earth, indeed, these fungi do more than just look like they might lick the ground. Animal-like in many respects, they actually digest almost every bit of the earth at one time or another, and make the rest of our lives possible in the process.

Mysterious, and mostly hidden, we often forget about the fungi that are perpetually beneath our feet. In these rainy days, when we feel like our skin might either mold or get sucked dry by mosquitoes, the mushrooms thrive. Perhaps the earth is, in essence, sticking out its tongue – its Earth Tongues – to catch the raindrops.

This won’t be the last time I write about fungi this fall! Britt A. Bunyard, PhD, Publisher and Editor-in-Chief of FUNGI magazine, will give a dinner lecture about fungi on September 23, and then lead a mushroom foray on September 24th. You can find the details at cablemuseum.org. 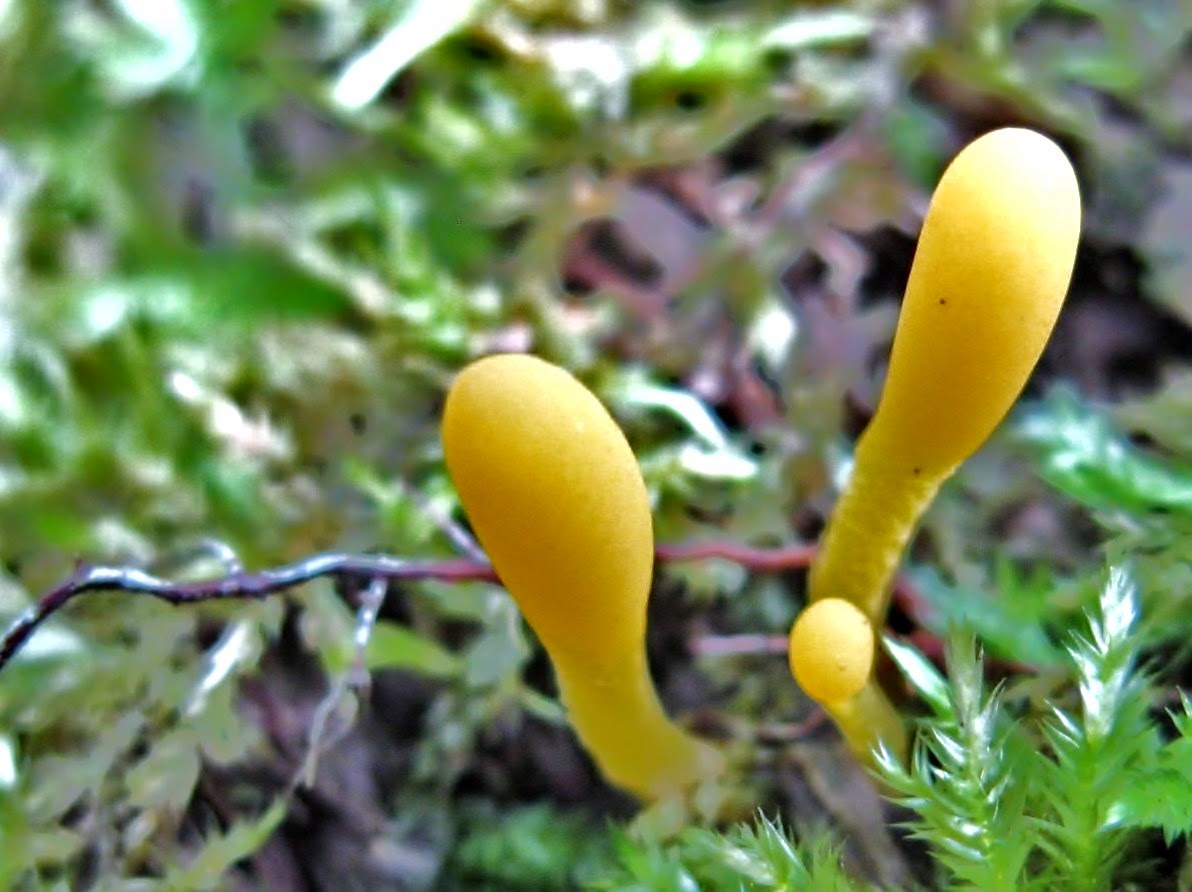 These Earth Tongues have pushed their way up through the Earth using strong, chitinous cell walls inflated with water to a pressure up to three times that in your car tires! Now the Earth can catch raindrops on its tongues…Photo by Emily Stone.
Posted by Emily M. Stone at 6:17 PM