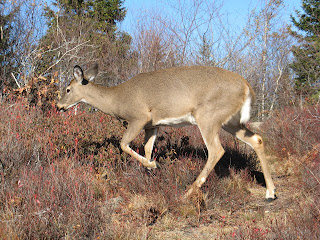 Deer move in ways we can’t. Notice how the deer’s back legs seem to bend backwards, her hoof is curled up while not on the ground, and her ears are cocked to listen for danger in multiple places. All of these area adaptations to help her survive! Photo by Emily Stone, taken in Acadia National Park, Maine.
With blue sky above and a skim of fresh snow clinging to every twig and blanketing the ground, I hummed along happily on the two-lane highway. When a doe leaped across the road in front of me, I pumped the brakes, and my dad’s voice echoed in my head, “Where there’s one there are more.” Sure enough, a thick-necked buck followed close behind, his antlers pointing intently at his quarry.
With hunting seasons and the rut (mating season) in full swing, October and November are the top months for deer-vehicle collisions in Wisconsin. According to the Wisconsin DOT, “Last year in Wisconsin, there were 18,414 reported deer/vehicle crashes that resulted in injuries to 556 motorists and nine fatalities (six were motorcyclists).” It’s no wonder that the Midwestern way to say “I Love You” is “watch for deer.”
Watch for deer, and you might just notice some of their amazing adaptations, too.
That deer run fast is both a blessing and a curse. They can flash into your headlights so quickly that you don’t have time to react, but ideally they also exit the roadway with expedience, too. Deer anatomy drives their speed.
Deer hooves correspond to our fingers or toes, and you could argue that this is where their speed begins. Those small, hard points have a relatively small surface area, which reduces friction in contact with the ground. Besides increasing speed, this also decreases noise when they’re walking through crunchy leaves. For added traction, deer have two vestigial toes, called “dew claws” that occur farther up their leg. These correspond to our pointer and pinkie fingers, and usually contact the ground only in snow or mud.
A deer’s hooves attach to their lower legs with a special ligament. As they plant a hoof on the ground, the ligament stretches out, with the deer’s own weight supplying the force. This stores energy like a stretched rubber band. When something startles the deer into a leap, that ligament snaps back. The stored energy adds power to their jump—which can clear an 8-foot fence. In a photo captured mid-leap, you can see that the hooves are curled back due to the contraction of that ligament.
That’s just one example of deer hinging in ways we don’t. Have you ever noticed that a deer’s rear “knees” bend backwards? Their lower leg bones correspond to the bones of our human foot, and the joint that is at “knee height” corresponds to our ankle. Although a deer’s front “knee” corresponds to our wrist, it looks more normal to us, because it bends in the same direction as our knees. 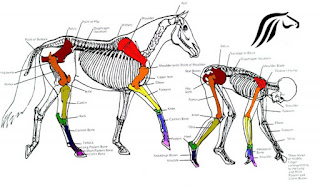 This diagram of a horse vs a human can help you imagine how a deer's skeleton compares to ours, too. Source.
As we travel up their legs, the adaptations continue. Deer lack a collarbone at the top of their front legs. This means that their left and right shoulders can pivot independently. With rear legs providing thrust and front legs steering, deer hit speeds of up to 36 miles per hour and turn on a dime.
To my consternation, deer don’t always use their speed, though. Sometimes they just stand in the middle of the road, looking confused. If your headlights are on, their eyes will shine. That’s the tapetum lucidum, a reflective layer in the back of their eyes that improves night vision.
Despite this layer, eyesight is not a deer’s most important sense. Deer ears are incredibly powerful, and like their front legs, can move independently of each other. By turning their ears this way and that, deer can hear sounds from behind them, and also pinpoint where sounds are coming from.
I love sharing this adaptation with kids. We all put on our “deer ears” by cupping our hands behind our ears. Their eyes widen in amazement as the sound of my voice is amplified. Then we start changing the way our cupped hands face, and noises from the back or the side suddenly come into focus. 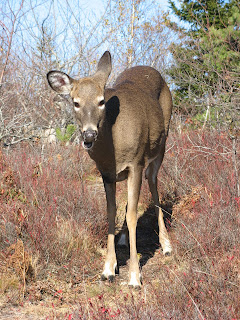 Look at those directional ears!
But hearing alone is often not enough for deer to identify danger. That’s where smell comes in. Once they catch a whiff of a human or a wolf on the breeze, those ligaments start springing.
Of course, deer didn’t develop these amazing adaptations to avoid getting hit by cars. It is their role as a prey animal that honed their skills. It might surprise you to learn that vehicles and wolves kill roughly the same number of deer in Wisconsin each year. Hunters, on the other hand, kill almost ten times as many deer as wolves do. Hunting is an important population management tool that can reduce deer/vehicle collisions and put free-range meat on our tables.
So, with the Wisconsin gun deer season opening on November 21, I’d like to wish success to all of the hunters, and to the rest of us, watch for deer!
Emily’s award-winning second book, Natural Connections: Dreaming of an Elfin Skimmer, is now available to purchase at www.cablemuseum.org/books. Or order it from our friends at redberybooks.com to receive free shipping!
For more than 50 years, the Cable Natural History Museum has served to connect you to the Northwoods. The Museum is closed, but our Mysteries of the Night exhibit is available online. Connect with us on Facebook, Instagram, YouTube, and cablemuseum.org to keep track of our latest adventures in learning.
Posted by Emily M. Stone at 12:00 PM