Point Your Beam of Curiosity at the Universe

Room by room, I went through the house gathering supplies and turning off lights. Finally, only the string of Christmas lights that I use as a nightlight by the front door remained. Cool air brushed my cheeks and a breeze sighed through the pines as I slipped yellow-lensed safety glasses over my eyes. Anticipation bubbled up. With a click, the heavy flashlight in my hand turned on, and a new world appeared. 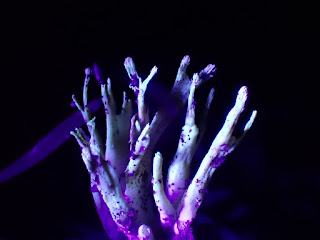 As I swept the beam back and forth across my yard, I was stunned to see that many leaves looked deep red. This isn’t an ordinary flashlight: it’s a V3 Black Light UV Flashlight from the brand uvBeast. They didn’t pay me to mention that, but I know some of you would want to know.
My first encounters with the magic of black light were in the back corner of Spencer’s Gifts on rare shopping trips to the mall. My white t-shirt glowed, along with the psychedelic posters of magic mushrooms and Grateful Dead bears. Cool, but not really my style.
Then, in early 2019, scientists at Northland College published a paper describing how flying squirrels fluoresce hot pink in UV light. That type of surprising science IS my style, so as I developed the Cable Natural History Museum’s “Mysteries of the Night” exhibit (which opened on August 4), I ordered a fancy UV flashlight and dreamed up ways to use it. Now that the mosquitoes are dead and darkness is falling before my bedtime, it finally made sense to take my new toy out for a night hike.
Gravel crunched under my feet as I headed down the driveway. I soon discovered that red leaves were everywhere, but not every leaf was red. This was especially puzzling in patches of moss, where some tufts remained green. Green is, of course, the normal color of a leaf in daylight. That’s because chlorophyll within the plant cells reflects green light back to our eyes. The chlorophyll also absorbs the violet, blue, and red wavelengths of light and then transfers most of their energy to other molecules for photosynthesis. Some of the absorbed light is re-emitted in a lower energy state—which also means a different color. 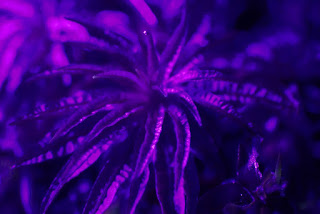 Ultraviolet or black light is very high-energy. The destructive power of UV light can be harnessed to kill bacteria and viruses, but it can also damage our eyes if we’re not careful. That’s why we wear UV protective sunglasses during the day, and why I was wearing safety glasses with yellow lenses for this black light adventure. It is also why we experience “snow blindness:” the cornea of the eye becomes temporarily cloudy to prevent excess UV from burning the retina. About 10% of normal sunlight is in the UV range.
So, when I shined my fancy flashlight at the leaf, the high-energy ultraviolet wavelengths were absorbed and re-emitted as lower-energy red light. This re-emitted light is called fluorescence. The process is impacted by the health of the leaves. In fact, scientists measure chlorophyll fluorescence to help detect many types of stress in plants, like the early stages of an infection; or drought. Remember when I mentioned that some mosses were red and others didn’t seem to fluoresce? As far as I could tell, it was the happy, well-moisturized mosses who fluoresced, and the dried out specimens who didn’t.
My flashlight didn’t just illuminate blood-red plants. A blue-white glow in the leaves revealed a mushroom hidden beneath the duff, and a millipede crawling over it. The tiny blobs of a slime mold (appropriately named tapioca slime mold—that should help you picture it) shimmered in a weird shade of greenish white. Grasses looked blue due to the properties of ferulic acid bound within their cell walls. A small patch of lichen on a tree trunk—a species who I know is usually drab gray—glowed orange. In one patch of happy red moss, a tiny grub shone brilliantly as it wiggled around, its digestive tract visible within its translucent body. 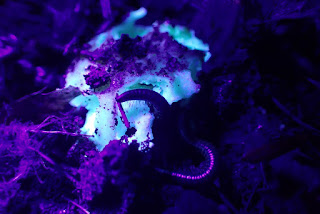 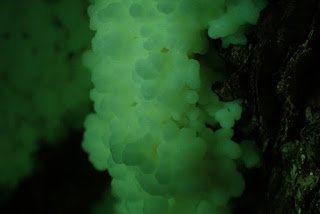 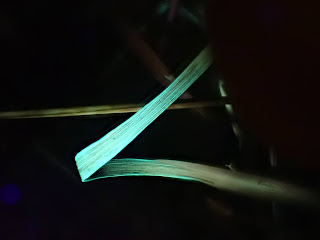 As I crawled along the high, mossy bank of my driveway, my beam of light illuminated wonder after wonder. The lives I thought I knew were transformed by this new way of seeing.
A light mist began to fall, so I headed back inside. Room by room I went through the house, putting things away and getting ready for bed, until once again I’d turned out all the lights.
When I awoke the next morning, the headlines were all about signs of life on Venus. Did you read about this, too? Jane Greaves, an astronomer at Cardiff University in Wales, pointed a telescope at our neighboring planet and used radio waves to identify the molecules swirling around its atmosphere. She found relatively high levels of phosphine, which is a chemical often produced by tiny organisms who don’t use oxygen. Is there life on Venus? It’s too early to tell.
What I can tell is that wherever we choose to point our beams of curiosity, they inevitably illuminate something new and wonderful. And if you ask me, that says more about our universe than our aim. 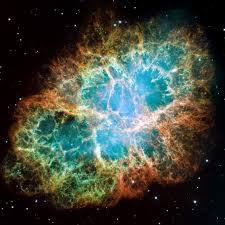 Emily’s award-winning second book, Natural Connections: Dreaming of an Elfin Skimmer, is now available to purchase at www.cablemuseum.org/books. Or order it from our friends at redberybooks.com to receive free shipping!
For more than 50 years, the Cable Natural History Museum has served to connect you to the Northwoods. The Museum is now open with our brand-new Mysteries of the Night exhibit. Connect with us on Facebook, Instagram, YouTube, and cablemuseum.org to see what we are up to.
Posted by Emily M. Stone at 12:00 PM