I’ve had a little more time than usual this spring to walk slowly with my camera in the woods, and my focus has zoomed in on smaller and smaller things. Naturally, I’m not always great at identifying these overlooked underdogs correctly on the first try. Show me three giant white petals rising above three big green leaves, and I can recognize a trillium with a single glance, from 40 feet away. Show me the quarter-inch-tall, reproductive structure of a primitive plant, and that’s a different story.

Early in April, while snow still covered more than half the ground, I started going for lunchtime walks to stretch my eyes as much as my legs. I’d been consoling myself about the lack of travel opportunities by deciding that the lockdown was as good excuse to finally explore more thoroughly around my own woodsy neighborhood. A patch of sunlight highlighted a mossy log—wet and happy from moisture provided by the melting snow—tucked into a little hollow near a hemlock tree.

I’m a sucker for happy moss, so I knelt down with my camera on its macro setting to capture the shimmers and sparkles…and found a tiny forest of translucent trunks topped by smooth, brown caps. An understory of tiny green leaves carpeted this magical fairy forest. 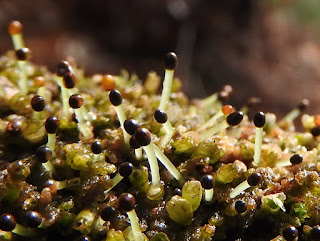 Moss is a non-flowering plant that reproduces using spores. Those spores are born in capsules, perched atop stalks called setae, and that whole reproductive structure is called a sporophyte. These were the youngest sporophytes I’d ever seen, and they glowed so beautifully that I had to post them to social media. At first everyone commented about the beautiful moss, but then my friend Patrick Leacock, a brilliant mycologist, had a hunch, did some research, and changed his identification to leafy liverwort.

Liverworts are another type of primitive plant. Like mosses, they reproduce using spores and absorb water directly into their leaves instead of transporting it through a vascular system. Mosses and liverworts both prefer moist habitats, and often can be found living side by side.

I went back the next day and looked closer. Indeed, the green parts around the base of the translucent stalks had a vaguely scaled appearance—a trademark of liverworts. Some larger types of liverworts look like lizard skin. In addition to the pattern of the leaves, I also discovered that a few of the dark capsules had ruptured along four seams and peeled open to release their spores. The cup-shaped capsules of mosses usually release spores through a lid, and then remain standing above the moss carpet.

Although that mossy log has since dried out, I think about the liverworts who live there each time I zoom past, and am glad I took the time to look closer.

About a month later, I spent an entire afternoon looking closely at spring wildflowers on the trail to St. Peter’s Dome. I’d been worried I was going to miss my favorite flowers, and instead found that I was on the early side for many. Trillium buds were tightly closed, and many plants were just a tightly furled spike of green.

One slope in particular sticks out in my memory for having an absolute carpet of spring beauties each spring. But as I hiked past, all I saw were the pairs of narrow green leaves with reddish stems poking up through the thick carpet of last year’s maple leaves. Not a single delicate white flower with pink stripes on its five petals bloomed up at me. 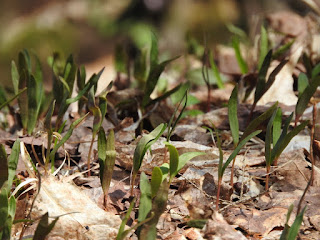 Finding microclimates is one of the joys of searching out spring ephemerals. It’s such a thrill to find that south-facing slope with the very first blossom when all else is still drab and brown. And it’s almost as exciting, weeks later, to stumble upon one final flower still blooming in the cool shade of a north-facing hollow. So, as I mentioned in last week’s article, I wasn’t surprised that this patch was so far behind, while others were in full swing. I snapped a quick photo for reference, and then focused my camera on more colorful things.

Suddenly, my thoughts fell into place and I gave a little exclamation of surprise and delight for figuring out this puzzle. Last fall had been a mast year—a bumper crop of seeds and nuts—for many species. Including sugar maples. I dug around a bit and found maple seeds galore, sprouted and un-sprouted, some with their husk still clinging to a narrow pair of leaves. Of course. Spring beauties almost always grow among sugar maples on the richest sites, but sugar maples can survive in a broader spectrum of soil types, too. Now knowing that these were sugar maple babies, I was in awe of their abundance. Surely some will escape predation and become trees!

So, yes, I make mistakes in identification. But I often remember what I learn from those mistakes a lot more fondly than uneventful identifications. Maybe I should go out and make some more!

Emily’s second book, Natural Connections: Dreaming of an Elfin Skimmer, is now available to purchase at www.cablemuseum.org/books. Or order it from our friends at redberybooks.com to receive free shipping!

For more than 50 years, the Cable Natural History Museum has served to connect you to the Northwoods. The Museum is currently closed due to COVID-19, but we're still building our new exhibit and bringing you educational content. Connect with us on Facebook, Instagram, YouTube, and cablemuseum.org to see what we are up to.