Dying Tamaracks and a Woodpecker Who Loves Them

Impressive pillars of reddish brown seemed to glow under gray skies as our small group of causal birders walked carefully along the narrow path of packed snow through Winterberry Bog. This 25-30 acre black spruce-tamarack swamp is nestled into the larger Sax-Zim Bog birding area about 50 miles northwest of Duluth, Minnesota. 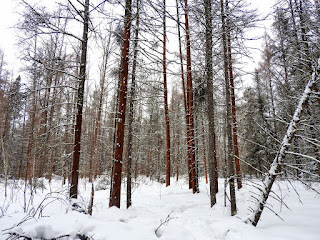 Although the tamarack trees lacked the green needles that clothed their neighboring spruces, that was to be expected. Tamaracks, also known as the eastern larch, or Larix laricina, are a deciduous conifer. In an unusual combination, these trees have needle-like leaves and bear their seeds in cones like spruces and pines, but they lose their leaves in the fall like maples and grow them back each spring.

Following both the trail and these bare, ruddy beacons deeper and deeper into the forest, we kept our eyes open for signs of life.

Signs of death were all around.

While the lack of needles wasn’t alarming, the beautiful warm brown color of the tamaracks’ trunks is actually their inner bark now revealed by their demise. Eastern larch beetles are the cause. In their hunger for the sweet products of photosynthesis, beetles’ larvae destroy the tree’s phloem. Those vascular tissues in the inner bark are supposed to carry sugars from high in the needles down to the trunk and roots. Once a tree’s vascular system is disrupted, the flow of water and nutrients ceases, and the tree dies.

Signs of life did eventually appear, though, revealed by motion among the tree trunks. About a dozen people dressed in bulky winter gear and peering through a spectrum of optical equipment from giant camera lenses to modest binoculars balanced on the network of packed-snow trails. All eyes were focused about 30 feet up on a tree trunk, where a small, black and white woodpecker clung and pecked.

I zoomed in and snapped a few photos, and then zoomed in some more on the camera’s screen. Where the sides of a downy or a hairy woodpecker’s belly would have been pure white, this woodpecker sported fine black barring. Down the center of its black back ran a section of messy white barring. And on other photos, taken at just the right angles, I spotted a small, yellow cap and counted three toes. (Most woodpeckers have 4 toes.)

This three-toed woodpecker is a rarity in the Northwoods. Its normal range goes farther north into the boreal spruce forests than any other woodpecker besides its Eurasian cousin. Like many birds, though, these woodpeckers take advantage of food bonanzas wherever they can. During the height of the Dutch elm disease outbreak in the 1950s through the 1970s, these opportunistic feeders showed up even farther south.

As we watched, flakes of bark rained down gently and scattered on the snow beneath the woodpecker’s perch in a dying tamarack. As I watched, the bird craned its neck to the side and wedged its beak under a loose piece of bark. A quick chipping motion soon freed the flake. This distinctive foraging style is characteristic of three-toed woodpeckers, as well as their cousins, the black-backed woodpeckers. They rarely excavate deep holes. When your lunch wiggles just under loose bark, there’s no need.

Although three-toed woodpeckers often find food just beneath the bark of trees in burned areas, blowdowns, flood-damaged forests, and other disturbances where insects have moved in, the Eastern larch beetle has provided them with a giant and long-lasting buffet.

Eastern larch beetles are native to the United States, and have always produced small and short-lived outbreaks. Since 2000, though, Minnesota has seen 20 consecutive years of outbreaks, with more than 440,000 acres infested, and no end in sight. Climate change is implicated in the beetles’ surge.

Adult beetles emerge in spring, find a new tree to infest, burrow into the bark, mate, and lay eggs. The mother beetles go on to deposit one or two more clutches of eggs. In the past, these “sister broods” didn’t have time to fully develop before winter. Longer growing seasons now allow more beetles to reach maturity each year, and warmer weather results in less mortality for the overwintering larvae. It’s a perfect storm, and forest pathologists have not found a cure.

While three-toed woodpeckers are taking advantage of the situation, birders can capitalize, too. Sax-Zim Bog is a southern outpost for many species typically found farther north. Protected areas like Winterberry Bog, and a visitor center run by the Friends of Sax-Zim Bog, have facilitated easy access to unusual species for a whole community of people interested in observing the interplay of life and death in nature.