Reading on the Beach

I slept with the sound of ocean waves crashing into the white sand beach. Through a full day board meeting in a cramped conference room, we kept an eye on swooping flocks of pelicans, took breaks on the balcony to inhale the smell of salt, and watched a thunderstorm toss dune grass into a frenzy. Everything from the humidity in January to the arc of wave-smoothed sand was outside of my normal realm.

Mary Oliver, my favorite poet, lived on the tip of Cape Cod and often wrote about the ocean—a subject quite novel to me. Her poem “Breakage” begins, “I go down to the edge of the sea,” and goes on to name and describe the pieces of broken shells she finds on the beach. It ends, “First you figure out what each one means by itself…then you begin, slowly, to read the whole story.” 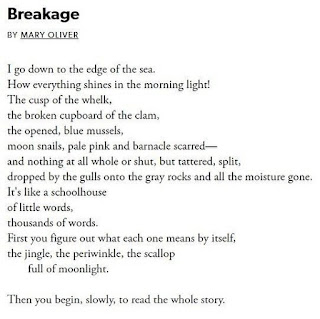 That concept I understand. I can go out in the Northwoods and read a story in the odds and ends of life I find there. But when I finally broke away from the group to take my camera for a walk on the beach in the late afternoon, the stories there seemed written in a foreign language.

The strandline—where the last high tide had left its burdens—was a mosaic of colorful bits of shells. The jumble teased me with the hope that something there would look familiar; would be identifiable. Give me a similar assortment of torn leaves from bog plants and I could recognize every one, but the shells were merely pretty. 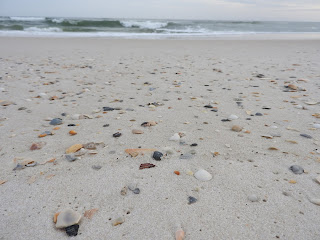 Then I caught sight of one white shell with a tiny, perfect hole. Near it was another shell with a similar puncture, and another, and another. When I lived in northern California and took kids to the tidepools there, we’d found similar holes in the conical shells of limpets. The culprit: one of several types of snails. Snails use acid to soften the shell of their prey, and a hard-toothed tongue called a radula to drill a deadly hole. Using a combination of their radula and digestive enzymes, the snail turns the owner of the shell into soup, and slurps it up as a midnight snack. A quick Google search told me that moon snails are the most common malefactors on this beach.

The lovely remains of these grisly feasts are perfect for stringing on necklaces or adding to charm bracelets.

The translucent blue balloons of Portuguese man o' wars are no exception. These were one of the first novelties to catch my eye on the beach, and I assumed they were jellyfish. Google soon set me straight. Despite its inflated top, trailing tentacles, and floppy translucence, The Portuguese man o' war is not a jellyfish at all. It’s a colonial organism. The balloon; the tentacles with their stinging cells; and all of its body parts are made up of different types of zooids that function together like a single animal and cannot survive independently.

Despite the Portuguese man o' wars famously fierce stings, once washed up on shore they are often eaten by ghost crabs. I was glad to happen upon this fact during my research, because it explains why many of the blue balloons I found were perched near the entrances of small tunnels in the sand. Those tunnels—as my Facebook friends informed me—belong to ghost crabs.

I’d been hoping that the tunnels were inhabited by Alabama beach mice, a species highlighted on a nearby interpretive sign. These endangered mice store the seeds of sea oats—and important sand-stabilizing dune grass—deep inside their tunnels. The sea oats seeds I found blowing around the beach looked dry and forlorn, while those forgotten inside the mouse tunnels find themselves in the perfect garden. Mice live farther up in the dunes, though, unlike the crabs who need to wet their gills in order to breathe. 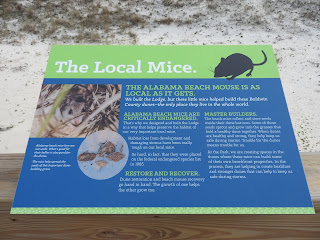 So, inspired by Mary Oliver, and assisted by my Facebook community and the internet, I’m learning a new tongue—one flavored by salt and full of the shushhhh of waves on sand. I’m beginning to piece together some of the stories on the beach. Snails drill holes in their neighbor’s shells, crabs eat colonial organisms that are not jellyfish, and mice plant seeds who stabilize the dunes.

These characters seem even more exotic now that I’m back among dunes of snow instead of sand. But with all of her diversity, Nature has only so many plots in her literature. Wherever I go, I recognize the muffled drama of predation, the necessary work of scavengers, the magic synergy of cooperation, and the serendipity of accidental gardeners. Wherever we go, there are stories that we can learn to read. 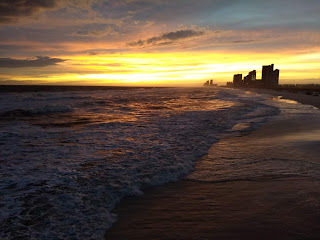