Headlamp stretched over wool hat, I strapped on snowshoes and ventured into the snowy dark.

A few flakes glittered through the air, but mostly the snow clung to trees and heaped on the ground. My light reflected brightly off white in all directions as I walked along in its bubble. The only sounds came from my snowshoes--creaking, squeaking, and shuffling.

Trees leaned out over the driveway, reaching their ice-encased, snow-frosted twigs toward my path. The lower edges of the iced twigs were scalloped with frozen droplets. Falling temperatures had slowed the drips to stillness. Unable to resist, I licked some fluffy snow-frosting off a birch twig.

Amazed at the beauty caught in every movement of my headlamp, I swept the light around in a wider arc, taking in the intricate patterns of twigs, needles, and snow. A ways off in an open area, the light caught something brighter. Two green eyes shone back at me.

Eyeshine is caused by a layer of tissue called the tapetum lucidum (which means “bright tapestry” in Latin). This layer sits behind the retina, and increases the light available to the animal’s photoreceptors by reflecting visible light back through the retina. Deep sea creatures and nocturnal animals use the tapetum lucidum to increase their night vision.

I was hoping that the two green orbs belonged to the neighborhood bobcat, but as the eyes moved, I could just barely make out the profile of a deer against the snow. Even so, I couldn’t stop my brain from imagining a monster or goblin behind those glowing spheres.

Undaunted by my overactive imagination, I followed a wandering herd of snowed-in deer tracks out the driveway and onto the trail. A snow-laden balsam arched across the trail at waist height, its tip buried under the crust. I gently swung it forward like a gate, and entered a tunnel fit for dwarves. 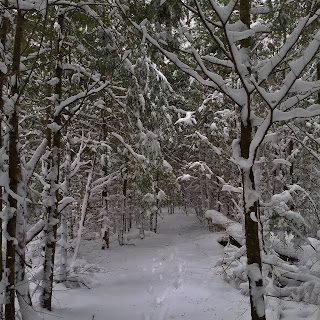 This section of trail sneaks through a thicket of balsam on an old road grade. It is always dark and narrow. Tonight, snowy balsam branches hung especially low and close as I bent down to shuffle through. The passageway heightened my sense of expectation and suspense, as if I really might pop out into the Narnian Empire at any time.

Instead, the trail entered a spacious hemlock grove. As the trees opened up, the dark closed in. Through the open understory, I caught the shining green eyes of four more deer. As they bounded away, a soft whisper of wind tinkled through the treetops. Snowflakes drifted down. The whisper crescendoed to a rush of air, and bigger clumps of snow fell, plopping all around me. As I put up my hood and leaned toward the trunk of a large hemlock, I imagined Ents in a snowball fight. When the dull thumps of falling snow had subsided, I continued on through the aftermath of drifting clouds of crystals.

A cute string of mouse tracks made me grateful for another sign of life. Most small mammals are hiding out under the thick, fresh snow, where a new world has just developed beneath our feet. This ephemeral habitat is called the subnivean layer.

The subnivean layer, like so much of life on Earth, owes its existence to the unique chemistry of water. When frozen, water becomes light and airy, a wonderful insulator. Just as down feathers in your jacket trap a layer of air next to your body, retaining the heat you radiate, as little as a six-inch layer of snow traps air that retains heat from the Earth.

Because of this insulation and radiating heat, a thin zone opens up under the snow, right at the surface of the ground, which stays at a pretty stable 32 degrees Fahrenheit. This becomes even more important as the temperature plunges into the single digits, and then below zero. Without snow to insulate the ground, frost burrows more deeply.

Tree roots, invertebrates, and the myriad little critters in the upper reaches of the soil suffer in cold, dry winters. Snow provides not only provides warmth, it also facilitates easy access to food, and gives cover from predators. “To the mouse, snow means freedom from want and fear,” wrote Aldo Leopold in A Sand County Almanac.

I emerged from the woods onto the gravel road and turned off my light. The world went gray. A grove of balsams—their drooping branches and conical shape perfectly adapted to the heavy snow—stood like statues in the White Witch’s courtyard. A rosy-pink glow in the northern sky gave an otherworldly aura to the night.

Beams of warm yellow light beckoned me back inside, but I hesitated, reluctant to leave this magical world behind.

“And if you have not been enchanted by this adventure-Your life-What would do for you?” –Mary Oliver

Note; This article was first published in 2013.