A cacophony of rattling cries filled the car as soon as my window slid down. While the engine noise faded, the chaos of sound crescendoed. Perhaps it isn’t surprising that sandhill cranes have such loud voices. At four feet tall, their extensive windpipes coil into their sternums. This amplifies the low, rich tones that can travel a mile or more across tundra, marsh, or field. Aldo Leopold wrote that they are “bugling the defeat of the retreating winter…”

Sound was only part of the experience, though. The soft gray bodies of cranes stretched as far across the stubbly cornfield as I could see. Farm equipment, irrigation sprinklers, and homesteads provided backdrops that faded in and out of the mist.

Every spring, over 500,000 sandhill cranes descend on the Platte River of central Nebraska. The agricultural landscape of the Great Plains may be derided by coastal humans as “flyover country,” but to the cranes, it is just the opposite. The shallow river and its gravel bars provide safety for nighttime roosting. Nearby farm fields hold feasts of waste grain, and surrounding wetlands provide additional food and habitat.

On their long migration from wintering grounds in northern Mexico, Texas, and New Mexico to their summer breeding habitat in the northern U.S., Canada, and even Siberia, sandhill cranes spend a very important month near the Platte River. Here they can put on an additional 10-20% of their bodyweight: fuel for the final leg of their journey.

As my friend Jamie and I poked our cameras out of the car windows, we were a little frustrated at how focused the birds were on eating. Heads down in the corn stubble, their fluffy gray rumps were cute, but not terribly photogenic. We could empathize, though. This crane-watching stop was just the halfway refueling point on our own, longer journey. The sunbathed slickrock of southeast Utah beckoned, but with evening descending, we also needed to find some dinner and a safe place to roost.


The cranes find safety in numbers. In any group, at least a couple sentinels stood with their red-capped heads upright and alert for danger. I was surprised to notice that cranes near the roadsides turned and stalked inward as my little station wagon rolled by calmly. Cars often make pretty good blinds for birdwatching, and surely these birds were used to traffic on the country roads that dissect so much of their habitat. But while cranes are protected in Nebraska and Wisconsin, they are hunted in Minnesota, Kansas, South Dakota, and several other states. It’s good that they are skittish around humans.


At first I was frustrated that simply driving by would interrupt their feeding and cause them to move farther out of the range of my zoom. Once the cranes became agitated and stopped feeding, though, a few of them started dancing. Sometimes called “ambivalent behavior,” it’s a way to release nervous energy when the danger isn’t serious enough to cause flight.

Lifting great black-fingered wings, they flapped, bowed low to grab some scrap, and leaped straight up while tossing leaves, stalks, or corncobs into the air. Their pointed toes and slim legs emulated the grace of a ballet. 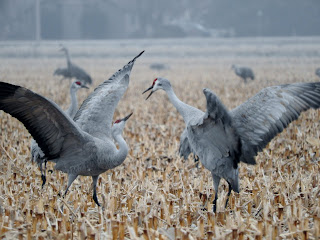 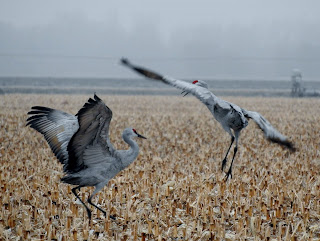 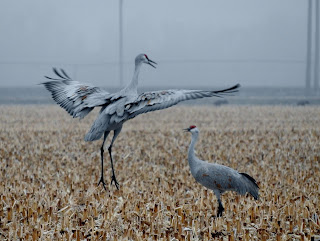 I’m sure a true courtship dance would be even more spectacular. The trumpeting unison calls of mated pairs would add to the intensity. The tango of two is essential to pair bonding, readying their hormones for mating, and even dissipating aggression between rivals. Parents dance with their colts to help them learn, and young cranes practice dancing for three years before they mate.

The sporadic dancing halted as a farmer on a four-wheeler sped off down a field. In great waves, wings opened and carried the birds aloft. They trumpeted and circled. The breadth of their reach, the urgency of their calls connected us to ancient rituals.

Aldo Leopold wrote eloquently of the cranes in the “Marshland Elegy” chapter of A Sand County Almanac. “Our appreciation for the crane grows with the slow unraveling of earthly history…When we hear his call we hear no mere bird. We hear the trumpet in the orchestra of evolution. He is the symbol of our untamable past, of that incredible sweep of millennia…”

That isn’t mere hyperbole. Cranes are some of the oldest living birds. In Nebraska, a 15-million-year-old crane skeleton records their ancient stake on the territory. Over that time scale, the habitat has changed more than the bird. Several glaciers advanced and retreated; with the last one just creeping into the eastern edge of Nebraska. Perhaps, even back then, the dancing cranes meant spring, and their great flocks were “bugling the defeat of the retreating winter…”

As the four-wheeler disappeared around a corner, though, a silent group of the circling cranes began to descend.  Like a flock of Mary Poppins, they arched up their wings and calmly parachuted down with leggy landing gear outstretched. Sometimes, flyover country is the perfect place to land.

P.S. The cranes are back in Wisconsin, too! Have you also been hearing them fly over?
This weekend is the Annual Midwest Crane Count. Find out more at:  https://www.cablemuseum.org/event/midwest-crane-count-4/

For 50 years, the Cable Natural History Museum has served to connect you to the Northwoods. Come visit us in Cable, WI! Our new Curiosity Center kids’ exhibit will open May 4.
Posted by Emily M. Stone at 5:00 AM