A Walk in the Winter Woods

Fifteen pairs of boots crunched down the snow-packed trail at the Forest Lodge Nature Trail. Most of the participants in my Wild about Winter Ecology workshop had hiked this trail in the summer, but with an ultra-fluffy layer of fresh snow draped across the boughs, the forest was transformed.

It was transformed, truly, into a blank canvas that lay ready to record the comings and goings of the local residents. The route of a running meadow vole was embossed into the snow below some pine trees at the edge of the field. It’s warmer for the vole if it can run through the subnivean zone where earth meets snow, but even staying just under the surface fluff keeps them a little more hidden from predators.

Climbing uphill through a thicket of balsam fir, we were startled by the whirr of a flushing ruffed grouse. With the thin layer of crusty snow we’ve been dealing with, that grouse would have been roosting in the dense evergreen branches instead of diving into a fluffy snow cave for nighttime shelter. Just a few steps farther down the trail, we found where the grouse had walked across the trail and into the thicket.

Grouse are exquisitely adapted to winter. They grow their own snowshoes in the form of fingernail-like projections on the sides of their toes. Extra feathers on their beak and legs provide insulation where it’s needed. And when their fluffy body feathers aren’t enough, grouse use the snow like it’s a cozy down comforter.

Once there are 10 or more inches of snow on the ground, grouse will dive or burrow into the fluff and spend the night in an air-filled tunnel. Temperatures under the insulating snowpack often reach a pleasant 32 degrees F. No matter how cold it gets, the snow roost rarely drops below 20 degrees F. Research has shown that grouse don’t need to really speed up their metabolism to keep warm until the temps dip below 25, so the snow roost provides them with significant energy savings.

We were not worried about saving energy. In our puffy coats, with handwarmers in our mittens, and lasagna waiting back at the lodge, we were excited to burn a few calories on this hike.

About halfway around the loop trail, we crunched out onto a boardwalk over the frozen bog. Exclamations of surprise and awe rippled through the group as folks recognized the location. Many had visited this bog in June, while learning about ecology during a Wisconsin Master Naturalist Volunteer Training Course. In the hot sun, while swatting mosquitoes, we had examined spongy sphagnum moss, the stained-glass leaves of pitcher plants, the delicate vines of cranberries, and the vibrant pink of bog laurel blossoms. What a change to see the smooth expanse of snow hiding our memories. Just a few old, dried pitcher plant flower heads popped out like little periscopes from the underworld. 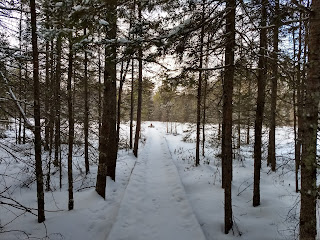 The bare, knobby branches of small tamarack trees attracted curious looks, as did some stunted white pines with short, yellowing needles. How did each evolve so differently? Both grow needles, but tamarack’s flimsy needles are deciduous, and are re-grown in a haze of chartreuse each spring. White pine, in contrast, fortifies its needles against frost and desiccation, and holds onto its investment for about three years. Tamarack thrives in the full sun of bogs despite the poor soil fertility, but white pine barely ekes out an existence in this place where it doesn’t seem to belong. The tip of a tiny black spruce tree, just peeking out of the snow, both keeps its needles and thrives in the bog. In the words of Daniel Quinn, from his book Ishmael, “There is no one right way to live.”

Crunching off down the trail, I stopped the group near a pair of old boot tracks that led off across a brushy area. “Just over that rise is the Secret Bog,” I informed them. “We can crash over there to have a look, or we can just head home on the trail.” The cold had not dampened their adventurous spirits, so we plunged into the mess of deep snow and fallen trees. Over the rise, down through a balsam thicket, and then we popped out on the edge of the Secret Bog.

Small hummocks and clumps of trees specked the surface of the windblown expanse. A weak winter sun sinking low on the horizon cast light and shadows over the stark scene. How do we survive the winter? By following our curiosity and finding beauty everywhere. The temperature was plummeting, and the breeze stole warmth from our bodies, but still people turned their faces to the sun. 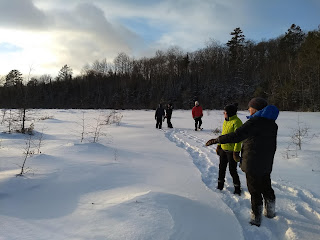 Emily’s book, Natural Connections: Exploring Northwoods Nature through Science and Your Senses is here! Order your copy at http://cablemuseum.org/natural-connections-book/.  Listen to the podcast at www.cablemusum.org!

For 50 years, the Cable Natural History Museum has served to connect you to the Northwoods. Come visit us in Cable, WI! Our new exhibit: "Bee Amazed" is now open!