Through the soles of our feet we experienced the transition from gravel drive onto leafy duff. Conversation faded as we entered the forest on a faint path and then formed a circle in a natural foyer surrounded by slender saplings. Fourteen women stood quietly while I pulled the book Swan, by Mary Oliver, out of my satchel. Above us, maple leaves glowed against a gray sky still lingering after a midnight rain. 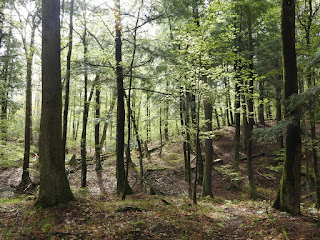 My finger found the bookmark I’d placed earlier, the pages opened wide, and I began to read the poem aloud. “What can I say?...The song you heard singing in the leaf when you were a child is singing still...” As the last poem concluded, a gust sent a crescendo through the canopy.

We closed our eyes and inhaled deeply, feeling the goodness of air as it filled our lungs. As cool sensation rushed in, we imagined all the previous lives that the carbon, oxygen, and nitrogen molecules had made possible. Returning our breath to the world, we sent our carbon back out into the forest to fuel new life. Giving. Receiving. Giving. Receiving. The breeze swirled all of our exhalations together and carried them off through the trees. 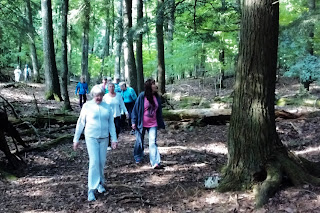 More than just simple air flowed into our lungs, though. All around us, nature was giving off an array of chemicals. These phytoncides include a bouquet of volatile organic compounds released by plants. Their main purpose—from the plant’s perspective—is to prevent it from being eaten, infected, or decomposed. Appropriately, the word phytoncide means “exterminated by the plant.” These toxins are categorized as secondary metabolites, or chemicals that aren’t essential for normal growth and reproduction, but which often help the plant survive in other ways. The strong smells and health benefits of onion and garlic are derived at least in part from phytoncides. While all plants have some, tea tree, oak, cedar, locust, and pines are known for having high levels of these helpful compounds.

In order for the plant to prevent damage to its tissues from too high a concentration of its own toxins, it has to have a way to excrete the excess and maintain balance. Some may escape to the air when pores open to let in carbon dioxide. Others may leach out and flow away with rainwater. Still more are released as the forest duff decomposes. However it happens, these phytoncides become part of the forest at large, and we breathe them in. 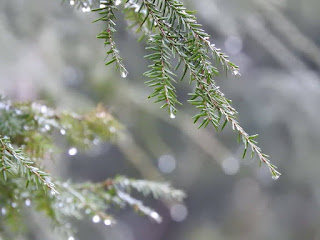 It’s a wonderful gift. Not only do the antibacterial and antifungal properties of phytoncides help plants fight disease, they also stimulate our human bodies to increase the number and activity of cancer- and virus-fighting white blood cells (also called natural killer cells), and to decrease the concentration of stress hormones.

That breathing deeply in a forest is good for you comes as no surprise to most people. Anyone lucky enough to live near the woods and smart enough to take time to enjoy them feels the benefits.

When I tell people that it has a name, though, they usually think I’m kidding. The Japanese Ministry of Agriculture, Forestry and Fisheries wasn’t joking, however, when in 1982 they coined the term “shinrin-yoku,” which translates roughly to “forest bathing.” In a country where they have a special word for “death by overwork,” this stress-reducing preventative medicine has become extremely popular. On official forest bathing trails, visitors regularly submit to measurements of blood pressure and stress hormones as researchers gather data. Psychological research reveals that forest bathing reduces anxiety, depression, anger, confusion, and fatigue while boosting cognition, focus, and empathy.

It’s not just the phytoncides. According to scientists, the air in forests and near water has relatively high levels of negative ions, which are purported to boost our mental outlook. Also, simply looking at trees is good for us. And then there are the bacteria.

Having healthy gut bacteria is emerging as a significant factor in our mental well-being.  In another example, inhaling the common soil bacterium–Mycobacterium vaccae has been shown to increase serotonin levels in the brains of mice. Not only does this “happy chemical” decrease anxiety, it also makes the mice smarter!  Mice given the bacteria navigated a maze twice as fast as the control mice. The effects do not last long, though, and scientists surmise that humans would need to be exposed about once a week in order to reap the benefits of these healthy bacteria.

That’s fine with me. It was lovely to walk among the regal hemlocks of Fairyland State Natural Area as patches of blue sky peeked in from above. We offered words of gratitude. I saw the lines on peoples’ forehead soften. Peaceful smiles glowed. While I read the poem “Black Swallowtail,” by Mary Oliver, I thought about how appropriate its metaphor was to our walk. The “interesting, but not exactly lovely” caterpillar busies itself with eating. Only after becoming a still, quiet chrysalis with “faith and patience” is it able to “express itself into the most beautiful thing.”

Above us, the leaves sang.