Fresh sunshine warmed my bare arms and legs as I biked along County Highway D east of Lake Namakagon. The joy of speed, freedom, and my trusty steed brought on an irrepressible smile. As we neared the bridge over a marshy flowage, a cacophony of bird songs began to cut through the whirr of tires on pavement and wind in my helmet. We pulled over onto the shoulder for a better look.

Red-winged blackbirds gurgled and trilled their early spring song that is so energetic it seems to cause ice to melt and streams to flow. A pair of Canada geese honked harshly from their grassy hummock; building their pair bond by shouting together. And then a rattling cry ripped through the air. My head snapped up automatically as I followed the sound and the blur with both my ears and eyes. Finally my focus landed on a slate-blue shape just settling on the branch of a broken snag.

“Kingfisher,” I said out loud, even though we both knew it already, as I whipped binoculars out of my bag. Just back from Central America, his breast was pure white with a jaunty blue band to match his powder-blue tux. A female would have had a beautiful rusty bar across her belly. Belted kingfishers are one of the few bird species where the females are more colorful than the males.

In the next moment I realized that he had something in his mouth—a large minnow probably—and he was whacking it against the branch over and over with sideways jerks of his head. At some point he decided that it was sufficiently dead. He tipped his head back, gave the fish a little toss, and down the hatch it disappeared!

While this minnow was comfortably bite-sized, kingfishers, who are thirteen inches long at most, have been known to eat fish up to seven inches long. Their trick? They leave part of the fish hanging out of their beak until stomach juices digest enough of the fish that it can slide in all the way. Also, the bird’s tiny tongue stays out of the way.

Young kingfishers have such strong stomach acids that they can digest fish and crayfish completely—bones, shells, and all. Once they leave the nest, kingfishers regurgitate pellets filled with the indigestible bits, just like owls do.

Those young belted kingfishers, who hatch in May or June, keep their parents busy by consuming their body weight in food each day. Luckily, kingfishers live up to their name with the help of several adaptations.

First, they can scope for prey either from a poolside perch or by hovering in one place high above the water. Like many birds, kingfishers have excellent eyesight. Oil droplets on their cone cells enhance their color vision and reduce glare as they search for prey. Two focal points in their eyes allow them to adjust for the change in refraction between air and water as they dive after a fish. The position of these two foveae gives kingfishers monocular vision in the air (each eye is used separately) and binocular vision underwater (which allows them to judge distance). A third eyelid, called a nictitating membrane, acts like protective goggles.

When a kingfisher dives underwater, its sturdy, conical beak wedges into the water and pushes it aside with minimal impact or splash. Japanese bullet trains, which operate at speeds exceeding 200 miles per hour and carry more passengers than any other rail line in the world, imitate the aerodynamics of the kingfisher’s beak to reduce noise pollution and improve fuel efficiency.

After grabbing the fish or crayfish with its vise-like bill, the kingfisher flies up to a perch to whack away, just like I witnessed. The chicks are fed small fish or regurgitated food. As the young grow up, parents teach kids to hunt by dropping fish into the water for the students to retrieve, just like in common loon families.

While their hunting adaptations are amazing, the kingfisher’s strangest adaptation is used for digging their nest burrow in a sandy embankment. Their inner two toes are fused together, resulting in what appears be a single flattened toe. This trait, called syndactyly, is not common, but it is shared by kangaroos, wallabies, opossums, koalas, and wombats. 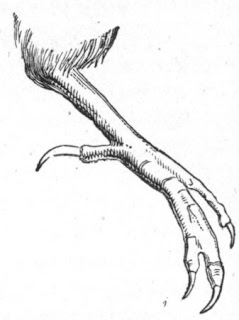 I will never cease to be amazed by the ways that nature has sharpened its every skill and perfected its many tools for survival. As we hopped on our bikes (wonderful products of human adaptation and innovation) to continue the ride, an osprey soared overhead, itself a magnificent example of adaptation. Admiringly I glanced back toward the kingfisher, and “with a rough and easy cry…he swung back over the bright sea to do the same thing, to do it (as I long to do something, anything) perfectly.” (Mary Oliver, “Kingfisher”)

Special Request: If you enjoy Emily's book, Natural Connections: Exploring Northwoods Nature through Science and Your Senses, and think it should be available for more people to read, then take a moment and request it at your local library and bookstore! Order your copy at http://cablemuseum.org/natural-connections-book/.  Listen to the podcast at www.cablemusum.org!


For 50 years, the Cable Natural History Museum has served to connect you to the Northwoods. Come visit us in Cable, WI! Our new exhibit: "Better Together--Celebrating a Natural Community" is now open!
Posted by Emily M. Stone at 6:00 AM