The torrential rain on Christmas Day was really a bummer. At my parents’ house in northeast Iowa, we had thunder and ice as well. Once we’d finished Christmas dinner and started opening gifts, though, the weather outside no longer mattered. As the semi-solid drops beat against the garage doors, we drowned it out with the tapping of a hammer on geodes.

The day after Christmas brought better weather, and three kids (well, four if you count me,) high on sugar cookies who needed an outlet for their energy. On went the boots, snow pants, jackets, mittens, and hats. Out came the rainbow of sleds and one snowboard.

Surprisingly, the snow was perfect. Just a thin layer of icy granules blanketed the paths Papa had mowed through the prairie, but that was enough. The sledding hill required no packing, no snowplowing through deep fluff to create a run, and no spray of loose flakes flew up in your face or down your neck. Walking up the hill was a breeze, too, without post-holing on every step.

After a few runs down the old fence line, parallel to a crumbling sentry line of dead elms, we switched to a path cut diagonally across the hill. I loved it. For some reason, I could maintain a straighter line on the side slope, and a sharp drop at the end provided just the right amount of added excitement. Also, I’ve always maintained that sledding is more fun when you yell.

Hiking back up brought even more excitement. There, in the middle of the mowed path, just below the house, was a line of large, 5-toed tracks. I had Zac (age 7) put his gloved hand in one: perfect fit.


Had I been in Wisconsin or Minnesota, my first thought would have been fisher. Animals in the dog and cat families have four toes. Weasels, bears, and raccoons have five. But that large weasel doesn’t live in Iowa. As I followed the trail of the 5-toed animal looking for more clues, I came upon a well-preserved pair of tracks—the first one short and roundish, the second one elongated like a child’s foot. I stared in disbelief and shook my head. Bear? Bear! In Iowa?

It’s actually not out of the question. Although Iowa is part of bears’ historic range, like many species, they were pushed out as the land became more settled. Just last June, though, my friend Brian Gibbs spotted one about 30 minutes from our sledding hill, and the Iowa DNR confirms about five black bear sightings a year. The working hypothesis is that as populations in nearby Minnesota and Wisconsin grow, antsy young males travel farther in search of food and females. I like the idea of my new Wisconsin home providing species to my old Iowa home.

I wasn’t sure how the kids would react, but I had to tell them. “I think these are bear tracks, guys!” I said, and we all admired the tracks for about two seconds. Then the sledding resumed, and soon the perfect tracks were obliterated. Oh well.

After sledding, Zac and I found Papa in his workshop and announced our discovery. We went out for a second look. The three of us picked up the 5-toed tracks at the bottom of the hill, and started following their trail. All the tracks seemed shorter now, like the bear had four front feet. The trail wasn’t very wide, either—not like a broad-chested bruin. And then, across a straightaway, the messy trail resolved into a neat, two-by-two bounding pattern leading away from a trough pressed into the snow on the hillside. The bounding is classic in the weasel family. The trough clinched it: otter. In winter, their favorite gait is run-run-run-sliiiiiiide, and I couldn’t help but smile at the fact that this otter also was sledding down our hill. 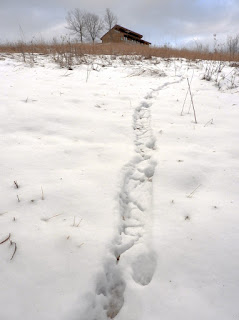 While otters, like bears, were extirpated from Iowa, otter reintroduction efforts began in 1985. Live-trapped wild turkeys were shipped from Iowa to Kentucky to help its restoration program. Kentucky sent cash to Louisiana, and Louisiana shipped otters to Iowa. In total, 345 otter were released in Iowa between 1985 and 2005. Today, the population is stable enough for a limited fur harvest.

Overland travel is not out of the ordinary for otters as they navigate between watersheds. They can travel up to 26 miles in a day, with 5-6 miles being average. Females and their young stay together in family groups, and males will form their own groups, too. We followed the tracks back up the hill, across the road, through the end of the orchard, and to the edge of a briar patch on the bluff above the Turkey River. We stopped there, confident now that there were actually two otters, and that they were headed to the river for a fishy snack.

Mystery solved, tired and warm from sledding and our hike, we headed away from the river, looking forward to a non-fishy snack. 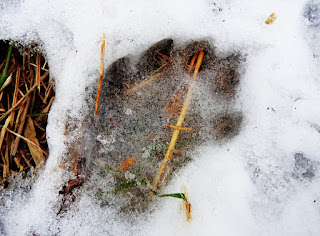