I could hear murmured gasps of surprise and appreciation as the Wisconsin Master Naturalist Volunteer students stepped out of the car caravan and into the Moquah Barrens. Rolling hills carpeted in grass and punctuated by pines stretched as far as the eye could see. Vistas aren’t common in Wisconsin. Our Northwoods landscape is dominated by dense trees. In contrast, the deep sand deposits left by glaciers on the Bayfield Peninsula provide the substrate for a grassland ecosystem reminiscent of the Serengeti.

Matt Bushman, the botanist on the Superior National Forest, gathered the group around to start talking about plants. As he held up sand cherry, smooth aster, and Pennsylvania sedge, the heavy clouds parted and a tentative sunshine brightened across the savannah. As the light strengthened, a high buzzing became noticeable and then intensified. The crescendo was so perfectly synchronized that it seemed as if the sunshine itself came with sound effects.

From behind my head I heard one particularly loud buzz. Not really expecting to see the source, I nonetheless peeked over my shoulder. To my surprise, I easily spotted the noisy cicada as it perched in a small jack pine tree. 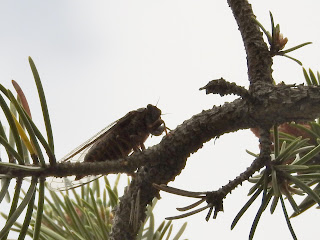 Cicadas are true bugs with wide-set eyes, short antennae, and big, clear front wings. They make noise not by rubbing together hind leg and forewing as in grasshoppers and crickets, but by rapidly vibrating a portion of their exoskeleton. The drum-like tymbals are a pair of corrugated membranes on the sides of the cicada’s abdomen. As the tymbals vibrate, the male cicada’s hollow abdomen acts as a resonance chamber and amplifies the sound.

Before long the sun disappeared above a passing downpour. We jumped into vehicles and bounced along a sandy road to our next site. The rain abated quickly as we gathered to admire a fresh burn. Just this spring the Forest Service had ignited a prescribed fire in this management block. The ground was still inky black with soot and charcoal, but already the bracken ferns had erupted in a neon green ruff across the hills.

Sunlight and buzzing filled the air. The class hoofed it uphill, picking their way through the shin-high forest of bracken. Something caught my eye against the black ground. A large, adult cicada crouched silently. Its huge, clear wings folded neatly over its dark back like a clear plastic poncho. Through the membranes I could see delicate orange bands on its abdomen, orange legs, and more orange markings behind its head. Wide-set, dark eyes fronted its alien head. 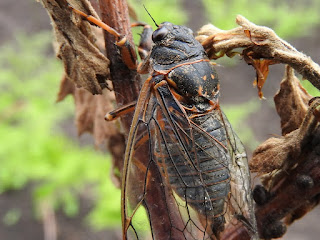 Nearby, still clinging to a charred stick, I found an empty shell. This wasn’t the body of a dead cicada, rather it was the discarded exoskeleton of a young cicada who had emerged and flown off as an adult. The exuviae, as scientists call them, were everywhere: tumbled on the ground, hooked to vegetation, blown into small drifts against the base of stumps.

As I looked down I began to see their tunnels, too—inky black, round holes as if we’d all just poked our fingers in the soil.

Cicadas have a fascinating life cycle. After seeking out a loud male and mating, the female cicada slices open a twig and lays her eggs. Upon hatching, the nymphs drop to the ground and use their strong front legs to burrow in. The nymphs will spend most of their lives about eight feet down, sucking up the sap of plants.

The number of years that a cicada nymph spends underground varies by species. Most types reach adulthood in two to five years. The most famous cicadas, though, are the 13-year and 17-year periodical cicadas of eastern North America. They emerge all at once in tremendous numbers. Their genus, appropriately, is Magicicada.

Magic indeed. Eyes on the ground, we soon found our own enchanted fairy. Perched on the empty exuviae—which was still hooked to a stick by tiny claws—sat a cross between a pixie and an alien. Huge, clear wings were threaded with glowing white veins. The plump, seafoam green body was etched with pale yellow and orange highlights. Staring straight at us were a pair of false eyes, with the vertical pupils of a cat. 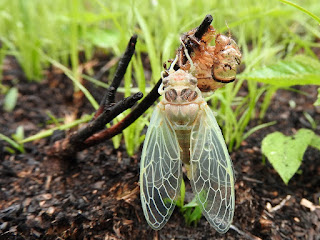 Once a cicada nymph crawls out of its hole, it climbs partway up a nearby plant, splits its exoskeleton between the shoulders, back-dives free, and then slowly hardens off and darkens in color. With shouts of excitement, we discovered a cicada in mid-back dive, its wings still folded like baby leaves. 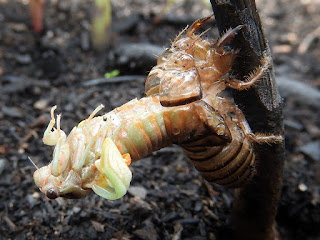 Magic as these were, they weren’t the 17-year cicadas. Those adults have red-orange eyes. A quick internet search brought up the tentative identification of Okanagana balli, the Short-Grass Prairie Cicada. (A species with a shorter life cycle.)

More raindrops finally snapped us out of the cicada’s enchantment. As we stood up to stretch cramping legs and crooked backs, the vivid green hills and shrouding mists of the Moquah Barrens renewed our sense of awe. Master Naturalist students study everything from landscape-scale geology to the ephemeral lives of insects in their week-long course. The breadth of topics can be exhausting, but some words from a friend seem to create enough space in my heart for them all. He said, “The world is beautiful at all scales.”