Lunch bag in hand, I hurried up the Cable Natural History Museum’s front walk, ready for another day at the office. On a whim, I detoured over to one of our native plant gardens. The round, pink cluster of flowers on a common milkweed drew me in, and I leaned over to inhale a big dose of their heady aroma.

As I finished drinking in their sweetness, my eyes opened, and then popped open wider. Caterpillar! There was no mistaking this wrinkly, black, yellow, and white-striped critter. Monarch butterfly caterpillars are as distinctive and easy to identify as their orange and black adults. Only an inch or so long, this little one was lying quietly on the upper surface of the leaf.

For a second, I worried about the folly of its bold, sunny perch. Shouldn’t it be hiding away in the shadows, safe from the hungry eyes of birds? It only took me a second to remember that monarch caterpillars don’t need to worry about that. As they munch on milkweed leaves, monarch caterpillars accumulate toxins from the plant’s milky sap in their bodies.

Not only do these chemicals make the caterpillars taste awful, they also cause any bird who eats the caterpillar to puke it back up. The bird remembers the experience, associates it with the caterpillar’s bright warning colors, and tends not to repeat the experiment. One caterpillar may sacrifice its life for the survival of its siblings.

So, with this protection in place, monarch caterpillars can focus on their most important task: eating. Monarch eggs are tiny – the size of a pencil tip – and develop for only four days before they hatch. The resulting caterpillar has a lot of growing to do. Over the course of just two weeks it will eat almost constantly. All that chewing takes a strong jaw – the average caterpillar's head contains 248 individual muscles. The goal: increase its body mass to more than 200 times what it was at birth. To accomplish this, a caterpillar eats its own bodyweight in food – milkweed leaves – each day. Some caterpillar species gain 20% of their bodyweight in a single hour. If I were to do that, the lunch bag still clutched in my hand would need to weigh over 28 pounds!

As they balloon in size, monarch caterpillars shed their skin five times throughout their larval life, each time revealing a larger skin waiting just beneath. Each stage is called an “instar.” The final time a caterpillar sheds its skin, it exposes the beautiful, jade-green chrysalis, and the monarch pupates.

Intrigued now, I squatted among the plants to look for more caterpillars, or eggs, or chrysalises. In my experience, two- and three-year old humans are the best height for executing caterpillar treasure hunts. Although no toddlers were available to help at the time, just taking their perspective won me two more tiger-striped larvae hanging out under leaves.

The basking caterpillar on the leaf’s upper surface still bothered me, though. Why not be better safe than sorry? With a little research, I soon turned up a scientific study in the Journal of the Kansas Entomological Society from 1981 that addressed that question. Rawlins and Lederhouse also noticed the basking behavior of monarch caterpillars. They, too, asked “why?”

What the researchers found, is that more often than not, the caterpillars rested in the sunshine in the middle of the day. Not only did they stay on the upper surface of the leaf, they also oriented their body broadside to the sun, for absorbing maximum solar radiation. The resulting increase in body temperature (up to 14 degrees Fahrenheit above the ambient air temperature) actually helped them to eat, digest, and grow faster.

In addition, the researchers hypothesized that increasing their visibility to birds actually helped caterpillars teach more potential predators about their toxic taste.

Female butterflies facilitate their caterpillars’ basking behavior by preferentially laying eggs on milkweed plants in the full sun, instead of in shady, wooded areas.

At night, caterpillars reverse their technique. On all but the warmest nights, caterpillars hide out underneath the leaves, shielding their body heat from the cold pull of the stars.

As the sun began to set outside my office window, I decided to go check on my little buddy to see if his behavior had changed. The dusk was cool and sweet. There he was, perched just where I left him. Only now, a crumpled gray wad of old skin lay next to him on the leaf. Was I imagining it, or did he seem a little bigger? While he rested, a neighboring caterpillar gnawed furiously at the jagged edge of another leaf. Grow, caterpillar, grow! 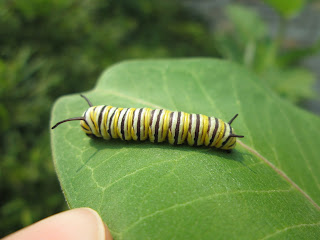