The Loons are Back 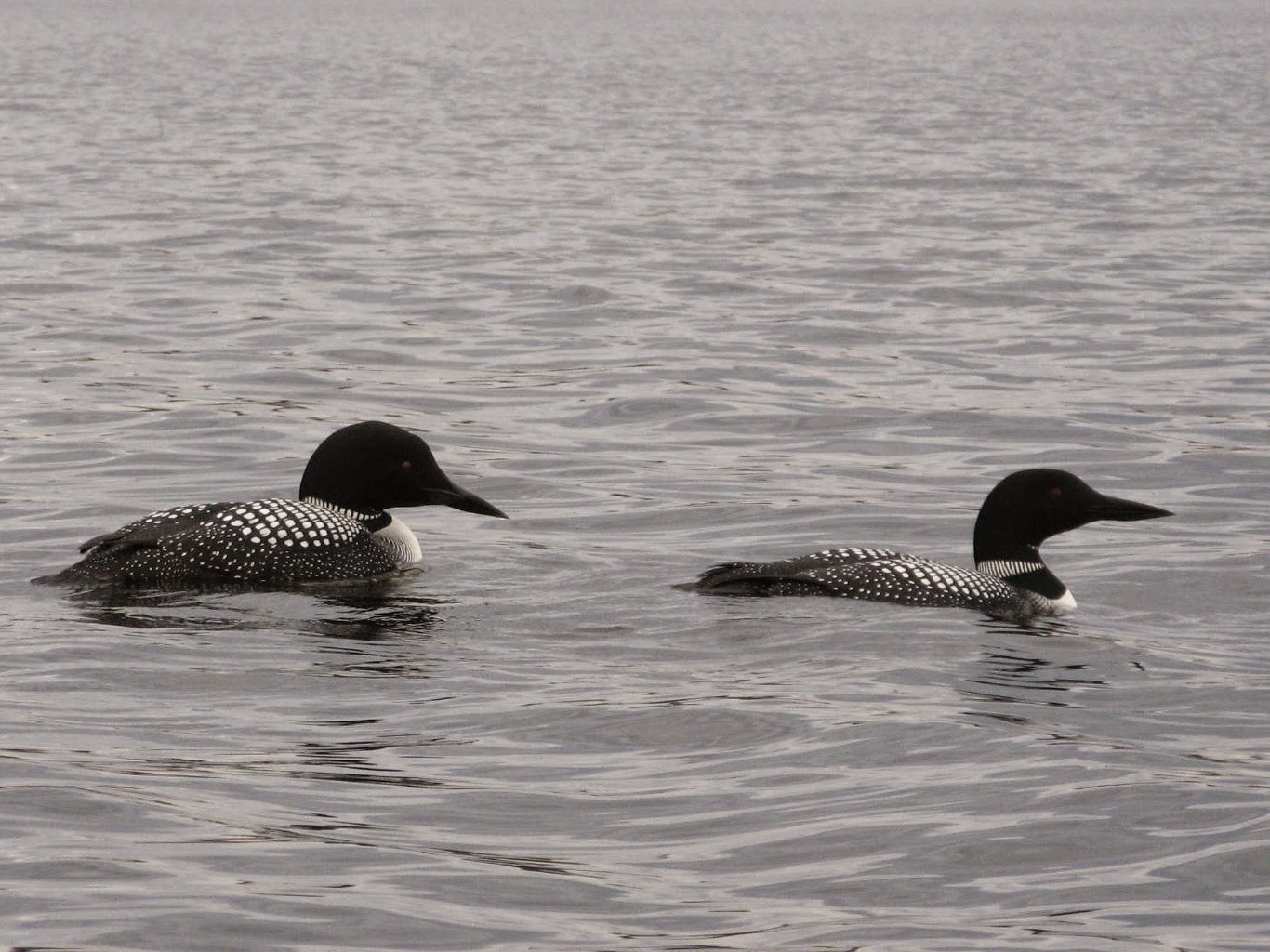 Cold water and rough sand swirled around my toes as I stepped into the lake. It was a welcome caress on the cabin fever of my feet. With one last heave, I slid my goldfinch-yellow kayak into the water. Frothy gray clouds left over from scattered showers polished each ripple into a mirror as I pushed off from shore.

Easy strokes soon propelled me around the point, heading for the bay where the loons always nest. Are they back? I’ve been expecting to hear their wails slip in through the tiny crack I’ve opened in my bedroom window. A chorus of frogs has been shouting my lullaby so far, and the calls of other returning migrants fill the day. The tiny, urgent, winter wren lets forth a tinkling stream of notes in the ravine. Tireless song sparrows shout “Maids, maids, put on your tea kettle-ettle-ettle,” over and over from the highest tips of alder brush. One white-throated sparrow sang “Oh sweet Canada, Canada, Canada,” as it hurried north. The pre-historic, rattling cries of sandhill cranes. The whinny of robins. But no loons.

Scanning the waves for any speck of a loon, movement in the tree line caught my eye. I strained for a better look. Great flapping wings, with both white and black feathers, came in and out of view. “Could it be?” I hoped. And then nodded with satisfaction as the great shape swooped up to land on the utility pole where the ospreys live. Last year that nest ended in tragedy, with only one of the family of four surviving. This year, we already have new owners and a half-built nest.

Turning into a boggy bay, I startled some wood ducks, who burst out of the dried reeds in a flurry of squeaky alarm calls. Then another noise—or was it a movement—caught my attention. Either way, I turned back toward the osprey nest in time to see a flash of white on an eagle’s head as it wheeled in the sky, chasing…or chased by – I couldn’t tell – the smaller osprey.

Eagles are majestic. They are also bullies. The technical term is “kleptoparasites,” which means that they will bother an osprey until it drops a fish, then swoop down and claim the snack for their own. Eagles are also the only common predator of adult loons. Which is what triggered the sound that caught my attention. Two loons were alarming at the eagle, with harsh cries to send shivers up your spine. “They are back!” I thought, as I alternated between scanning the water in their direction and following the aerial battle. A smaller bird, probably a crow, joined in the chase. Soon it was clear that the eagle was on the run, and the osprey escorted it to some invisible boundary before swinging around and heading back to its nest.

I paddled toward the now-quiet loons. Straining my eyes, two black dots soon distinguished themselves from the distant shoreline. It had to be them.

At this point in the season, any two loons who can be in such close proximity without yodeling conflicts must be a pair. Are these the same loons who reared one chick safely into October last year? It is impossible to tell without bands, but the research suggests that it is likely. Loons have an incredible sense of place. They will choose a territory as much like the one they were born on as possible. Once they have a territory, they prefer to keep it. The place-based knowledge they acquire each year– the best nesting spots, best fishing spots, common hazards – is invaluable. While it is possible for loons to mate for life, it is their attraction to a territory—not each other—that keeps them together.

By now I had slid close enough to see the gleaming white and inky black checkers on their backs, and the sleek swoops of their foreheads. Over the winter, loons lose all of their flight feathers at once as they molt back into breeding plumage. It is known as the “pre-nuptial” molt, and they arrive here looking their best and ready to woo a mate.

I drifted in the evening light as the loons courted nearby. The birds swam toward each other for a distance. When they got within several feet, one loon spun around and they both swam the same direction. After a moment, one dove, surfaced farther away, and the routine would start again. Their coy behavior and snazzy black-and-white garb reminded me of a blurb about Senior Prom I read in the newspaper’s events calendar.

Spring is here. With it comes young and hopeful life decked out in many styles of tuxedoes and rainbows of colorful gowns. Everyone must sing, perform, defend, watch, or choose according to their own, individual, natures. Who have you been admiring this spring?

For over 45 years, the Cable Natural History Museum has served to connect you to the Northwoods. Come visit us in Cable, WI! We are currently constructing our new exhibit: “Lake Alive!” which will open May 1, 2015.