Pedaling happily along Lake Namakagon one warm evening, I caught a whiff of something dead on the breeze. Scanning the ditch, I soon saw the source: a mass of scraggly black and white feathers. Just ahead, perched on top of a utility pole was an osprey nest I’ve been watching all summer. It was silent and empty. My heart in my throat, I whipped around in a driveway and went to investigate.

Sure enough, the hooked, black beak of the large, fish-eating raptor lay among the wreckage. My heart sank—definitely an osprey.

Then a movement caught my eye. A large black beetle with pale yellow markings scurried out from among the feathers and disappeared underneath the carcass. Curious, but tamping down a slight feeling of disgust, I poked around with a stick, and found two more beetles – a smaller on one top of a larger one.

These American carrion beetles lay their eggs on dead animals and fungi. Then the parents stick around to eat fly larvae and the larvae of other carrion beetles in order to give their own kids a competitive advantage for food. When they hatch, the beetle larvae eat both the carcass and other larvae, and possibly the dried skin and bits of leftover flesh. The larvae pupate in nearby soil to begin the cycle again.

Osprey talons are one of the most amazing parts of their body, so I poked around at its feet, too. The skin looked puffy and dry, and out from underneath it squirmed dozens of little white maggots. Nature is quick, and no part of this osprey would be wasted.

Sad as I was about the death of “my” local osprey, I was already formulating an article about the way that nature recycles itself, and no death is really the end of anything, only the beginning of many different things. These beetles would be food for something else –maybe a fish—that could in turn be caught by an osprey, and the nutrients would have gone full cycle.

But the cause of its death still puzzled me. Why would an adult osprey be in the ditch? Owls often swoop low for mice and are hit by cars, but an osprey would not have dove through the trees to catch a fish on the pavement.

Back at home, I checked online. According to the Animal Diversity Web created by the University of Michigan Museum of Zoology (http://animaldiversity.ummz.umich.edu/) both eagles and owls sometimes attack osprey adults and young.

But how often does that happen? I wondered. Next, I called the education department at the Raptor Education Group, Inc., in Antigo, WI. They have a rehab facility, and I thought they might have anecdotal stories of eagle- or owl- injured ospreys coming in to get fixed up.

I told the educator my story over the phone. “Can my supervisor call you back?” she asked when I finished. Surprised, I agreed. We often call REGI’s Director, Marge Gibson, with raptor questions, and she rehabilitated the great horned owl that Katie Connolly, our Naturalist/Curator, is now training to be an education raptor. But I know Marge is very busy, and wouldn’t think to bother her with just a curious question.

“This was near the nest over by Garden Lake?” Marge confirmed a few minutes later. For a moment, I was honored that she even knew about “my” nest. Then, “The male from that nest was found shot a few days ago. He was brought here. The chicks were starving, and one was hit by a car. The living chick was able to see its father before we had to put the adult down. His injuries were just too severe. You must have found the mother.”

Sadness was my first emotion – a sinking in my stomach, a feeling of despair and loss. Then, as I realized that a fellow human had caused these deaths, with a gun, on purpose, my feelings changed. The slight aversion I had felt when smelling the rotting carcass was nothing compared to this new wave of disgust. Decomposition is a natural process at least; mitigated by fresh air. This was totally unnatural and unnecessary, not to mention despicable.

Ospreys are not a threat to humans in any way. Some fisherman believe that ospreys compete with them for fish, but according to the Animal Diversity Web, “Studies have demonstrated that ospreys take a very small portion of all fish harvested and are not serious competition for commercial and recreational fishing.”

Across northern Wisconsin, several ospreys are missing from their nests. A barred owl was found shot near Lake Namakagon. Someone is on a killing spree. There is a legal investigation; these are federal crimes. But you can help, too. Don’t let someone brag about senseless destruction. Make it clear to them and their friends that you will think less of them as people if they kill needlessly. Help us to strengthen our culture where these actions are condemned and not condoned. Please call the Wisconsin DNR if you have any information about these crimes.

Please help us keep these beautiful birds soaring in the sky instead of rotting in a ditch! 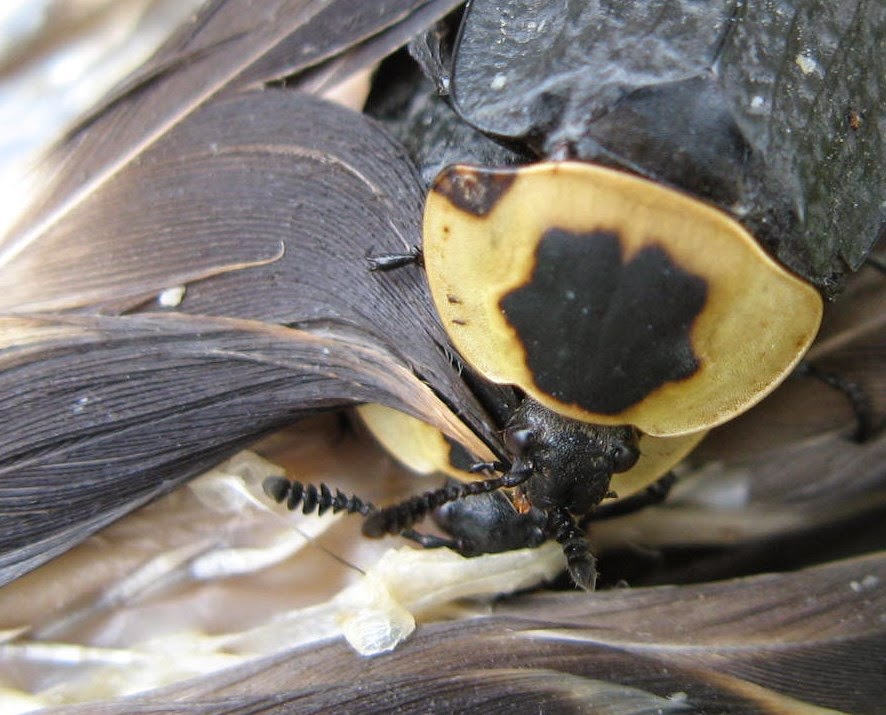 American carrion beetles eat both the carcass and the other larvae on the carcass. These two beetles are starting a new generation, which will also feed on what’s left of the carcass. The cycle of life continues. Ospreys are beautiful raptors that eat only fish. They are an inspiration to watch soaring through the sky.
Posted by Emily M. Stone at 6:14 PM