The Babes of Summer

“I’m an Aunt!”  announced the email subject line from my cousin Heather, hours before a flood of Facebook posts showed a tiny, red-faced infant with a shock of black hair.

I’ve had the honor of being an aunt for 12 years, and just last week I was able to play with all four of my older brother’s kids. In t-shirts and shorts, they clambered up a tree fort, built fairy houses, leapt around a circle of logs, caught bugs, built a pea trellis for me, and then—happy and exhausted—climbed into car seats for the rest of the drive to the cabin.

Summer is the time when young animals of all kinds thrive.

As the kids headed toward a lake cabin, I took off for the Boundary Waters Canoe Area in Northern Minnesota for a quick trip. Our second day of paddling took us from Meads Lake through narrow lakes and over LONG swampy portages dotted with moose tracks. Pulling the canoe up onto the rocky landing for yet another carry, we heard a splash across the way. A cow moose and her calf had just waded in, and were swimming toward us.

Having lived into late July, this calf was doing pretty well. As many as 50 percent of moose calves don’t make it beyond their first six weeks. But, if they can escape bears and wolves to reach maturity, they will have a 95 percent survival rate as an adult.

The calf’s head was warm brown and kind of scruffy looking. It trailed just behind its mom, relying on her for guidance. This calf would have been about 36 pounds at birth, after having  developed for 231 days inside its mom. This summer it will gain about two pounds per day while nursing.

To produce enough energy for both her and her calf, the mama moose will eat about 44 pounds of food each day. Aquatic vegetation is especially nutritious and easily digested, so cows feed heavily along the edges of lakes and rivers, and in marshes and swamps. They can even dive under the water to get at tasty submerged plants!

Living around all this water, it is no surprise that moose are well-adapted for swimming. Despite their enormous weight (females weigh up to 900 lbs., and males up to 1,300 lbs.), hollow hairs give moose buoyancy, and large feet make great paddles.

The pair made it across the narrow lake in no time, and disappeared into the woods. We waited a few minutes before picking up the canoe, since moose have poor eyesight, and are known to charge things that they cannot see well. Even so, we caught a glimpse of the fuzzy brown rump of the calf as it crossed the portage trail and splashed into the neighboring beaver pond. We admired their fresh, heart-shaped tracks in the mud.

Mud and moose tracks were abundant on our next half-dozen portages, too.

At another landing, a flurry of tiny splashes roiled the surface of a puddle as I stepped onto a nearby rock. As the sediment settled, the small, dark bodies of tadpoles revealed themselves. Based on the frogs mating calls that I’d been hearing (banjo-like plunks coming from the lake edges), I guessed that these the adorable little pollywogs were young green frogs.

While green frog eggs hatch in three to seven days, the tadpoles can take anywhere from three to 22 months to begin metamorphosis into full-grown frogs. Many tadpoles hibernate over the winter, and transform in the spring. Unfortunately, a shallow puddle on a rocky landing will not protect them from the sub-zero winter. Grow fast, little buddies!

After finally reaching our campsite, we set up the tent, went for a swim, and started making pea soup. Dinner was being served in a nearby northern white cedar tree, too. A young chickadee begged for food with a raspy version of the “chick-a-dee-dee-dee” call. Both parents attended it faithfully, bringing mostly caterpillars. Chickadee parents will feed their young for five to six weeks, until they reach independence. Chickadees lay seven eggs on average, so this clutch might have already experienced high mortality.

Young animals are thriving – and dying—all over the Northwoods right now. Part of nature’s way is produce enough babies that you can afford to lose a few (or a few hundred) and still carry on the species.

Happily, most young humans get plenty of good care as they grow up, and don’t have to worry about bear attacks, evaporating puddles, freezing winters, or finding enough caterpillars. Instead, kids can focus on building sandcastles, learning to water ski, stalking dragonflies, and just plain looking cute. Congratulations (and good luck!) to all the new parents out there, human and otherwise. 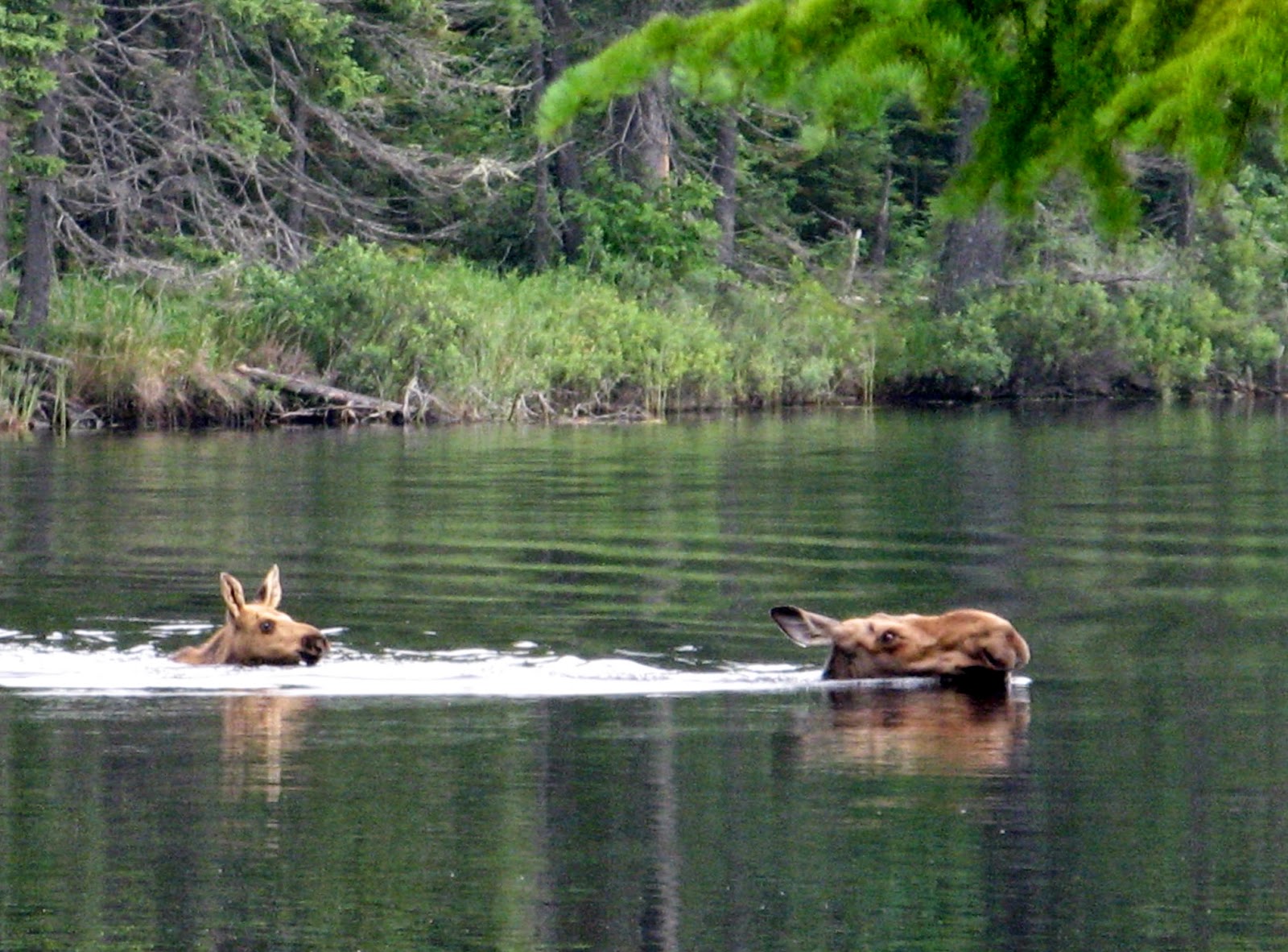 Moose adults and young are both excellent swimmers dues to their hollow hair. Photo by Emily Stone
Posted by Emily M. Stone at 3:00 PM