As I came around the corner, a dark blob at the edge of the road caught my eye.  You know how we are always seeing things that aren’t there?  Mailbox reflectors turn into deer’s eyes in our headlights. Tall stumps look like black bears.  Clumps of leaves take on the shape of an owl.  The dark blob was less than three feet tall.  It had pointy ears and a sloped back.  It was black against the bright mid-day sunlight and white snow.  Then, in an impossible moment, it went leaping back into the tangled fir thicket.


Bobcats aren’t rare in Wisconsin, but I’ve only found one set of their tracks in all the miles of trails I’ve hiked and skied in Wisconsin.  Actually seeing an animal make tracks is an excellent learning opportunity, so of course I stopped the car in an open stretch of road, put on the blinkers, and went over to check out the disturbed snow.  Since the flakes were light and fluffy, none of the four toes were visible in the tracks.  I could tell generally where the wild feline had walked calmly up to the edge of the road, sat down for a bit, and then hurried off with big poufy bounds.


If I hadn’t seen the actual cat, I don’t think I could have identified its tracks.  I could tell, by the size of the body and size of the tracks, that this was not a lynx.  Canada Lynx, with their four-inch wide, snowshoe-like feet, have never been abundant in Wisconsin, since they prefer the deep snow and thick conifer habitat of their favorite prey—snowshoe hares.  Some years, when the snowshoe hare population in Canada crashes, lynx will wander down to Wisconsin to find food.  There hasn’t been a sighting in Wisconsin since 1992, and only 28 verified records since 1870.  Because lynx are so rare here, they are listed as a Protected Wild Animal, but not as a State Endangered Species.  They are on the federal list.  Bobcats can be trapped and hunted.


A few weeks ago in Minnesota’s Cascade River State Park, I watched as a bobcat walked up the trail toward me. It chose a soft place in the pine needles and laid down for a catnap, or perhaps it was waiting in ambush for a squirrel.  Some minutes later it stood and stretched.  Maybe it wasn’t hunting as much as digesting, since it paused then to squat and deposit a long, dark hair-filled scat.  With that business taken care of, it walked daintily down the trail.  A string of oval tracks just smaller than my lip balm were pressed into the light dusting of snow.


Don’t you believe me?  I watched it happen, just like a movie, in my mind’s eye.  The body print was just so on the pine needles, the four tracks of a squatting position had an extra sharpness due to added pressure and time.  The scat was positioned exactly where you’d expect it to be.  Poet Mary Oliver tells a similar tale from deer tracks in The Pine Woods, and challenges us, saying “But I don't believe only to the edge of what my eyes actually see in the kindness of the morning, do you?”


Was I seeing things?  Absolutely, and that is the very essence of tracking. 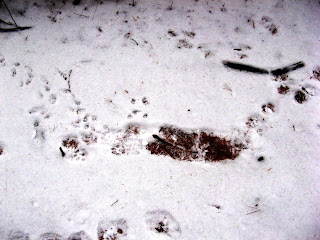